As a musician, MIDI will always be my first love. I’m a full-time freelance producer and composer now, and I use a hybrid of live instruments, MIDI, and piano roll interfaces to work on music these days. But it was a MIDI editor at age 14 that swept me into the world of music production in the first place. I would open primitive .mid versions of my favorite pop punk or video game songs, and study their arrangements. This was how I learned my fundamentals.

What is MIDI exactly? Musical Instrument Digital Interface. It’s one of the oldest corners of digital music production that’s still widely used. A MIDI keyboard or other MIDI instrument typically doesn’t have its own onboard instrument sounds, or speakers. It connects to a computer or (less commonly these days) a sampler, via USB or MIDI cable. The MIDI instrument sends along information about what note(s) you press and for how long, as well as the velocity (which translates to dynamics.) 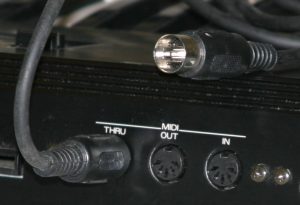 MIDI may be relatively primitive, yet it is very powerful and still has a central place in music production. When working on music involving a lot of soft synths or samplers, MIDI is a great way to jam and record parts, bypassing tedious piano roll manual entry. Even better, MIDI-recorded parts offer fabulous flexibility compared to live playing. The parts can be quantized to perfect timing. You can edit individual or multiple notes with ease. Velocity can be evened out, or exaggerated.

These days, a very common starter kit for new music producers involves a laptop, studio headphones or monitors, and a MIDI keyboard. With this simple yet elegant setup, and the right software, a green producer can jump into playing with sounds and making their first tracks. And one particular keyboard has risen to the top of its class- The AKAI MPK Mini MkII.

I used to frequent the subreddit r/WeAreTheMusicMakers– a great corner of the internet to absorb production tips and tricks. I witnessed dozens of posts by new producers showing off their starting setup, and that AKAI is nearly ubiquitous. With good reason- it has a friendly price point, a tidy and compact design, and an excellent range of controls. The MPK Mini MkII features 25 piano keys, eight drum pads, and eight programmable dials. It can handle every part of producing synth-heavy music- whether it’s EDM, chillwave, hiphop, pop, or more.

But you may wonder about your options. The AKAI MPK Mini MkII is wonderful, but it’s not the only kid on the block. And depending on your own specific needs as a musician, something else might be more suited to your needs. Just as the heavy-hitting Focusrite Scarlett 2i2 has its share of competitors, so too does the MPK Mini. Read on for a breakdown of some alternatives to the MPK Mini MkII.

If the price and feature set of the AKAI are right, but you just want to know what your choices are- the Novation Launchkey Mini Mk2 is a worthy contender. Novation is known for their 8×8 pad Launchpad, perhaps the most iconic pad-based MIDI device. But their Launchkey is something of an AKAI-killer.

In fact, my recommendation edges towards the Launchkey over the MPK. The MPK wins style points- it has a better overall look, with the feeling of a fashion accessory as well as production tool. The Launchkey is anonymous in comparison. The Launchkey also curiously lacks dedicated pitchbend and modulation controls.

But otherwise, the Launchkey is a cut above. It has sixteen pads, over the eight offered on the MPK. While the average reviews of the two keyboards are comparable- I dug a little deeper and noticed something. The AKAI MPK has a higher proportion of 1-star reviews. Many users complained about the low build quality of the MPK. One particular design flaw is the MPK’s keyboard- the entire thing is one molded piece of plastic that flexes when the keys are pressed. A cost-saving design to be sure, but apparently keys are liable to eventually snap off. Conversely, reviews praised the Launchkey’s build quality.

Many reviews also complain about the lack of support for the MPK- setting it up can be a mystifying task. Reviews praise the Launchkey’s inclusion of Ableton Lite and instrument library software, and Novation’s website features a series of videos to help new users get started. Considering the AKAI MPK Mini MkII and the Novation Launchkey Mini Mk2 are about the same price- my recommendation is for the Launchkey!

If you are looking for a significantly lower price, and perhaps even greater portability, then check out the M-Audio Keystation Mini 32 Mk3 and the midiplus 32-Key MIDI Controller. In my opinion, the choice is a toss-up, which is why I am settling on a tie. The midiplus is significantly cheaper, but they are both such low-cost options that it’s hard to imagine that the price difference is a true tie-breaker for most people.

Both of these keyboards have 32 piano keys over the AKAI’s 25, but neither has the AKAI’s programmable pads or dials. Both have similar reviews, mostly positive, but with a vocal 1-star minority who complain of low durability or installation issues or defective models. With budget equipment, that is basically the name of the game. M-Audio is a larger and more established brand than midiplus, which can translate to better customer support if something does go wrong. Overall, these two hyper-portable keyboards can enable those with wanderlust tendencies to create wherever life takes them.

The AKAI MPK Mini MkII and the aforementioned Novation Launchkey are notable for their sampler-platter approach- they feature keyboards, trigger pads, and knobs (otherwise known as control surfaces.) KORG’s Slim-Line Series offers an alternate approach. Each of the three devices in the series costs about ½ of the AKAI or Novation, but each one is a dedicated device. A 25-key MIDI keyboard, an eight-pad drum controller, and a more expansive control surface. If you need one functionality of the AKAI or Novation, but not the others, these could be strong choices.

The MIDI keyboard has an unconventional key setup- it looks like a sci-fi take on a piano keyboard. Reviews suggest that it is odd at first, but surprisingly natural and expressive once you’re familiar. What’s more, KORG is one of the more established and respected brands to be mentioned in this article. The low proportion of 1-star reviews suggests a better user experience and durability.

For all their popularity, MIDI keyboards are surprisingly limited. They are paperweights on their own, useless without an external sound bank and speaker. In fact, every MIDI keyboard I have looked into so far has had at least one 1-star review from a newbie complaining they didn’t realize that the keyboard doesn’t make its own sound.

A few hybrid devices have appeared, although they are far in the minority. If you are in the market for a functional MIDI keyboard, but also crave the ability to actually play the keyboard like an instrument, then check out AKAI’s MPK Mini Play. As you can tell from the photo, this device is nearly identical to the MPK Mini MkII. However, there is an added dimension- the option of battery power, a built-in speaker and headphone jack, and a library of internal sounds.

This keyboard can therefore do anything the MPK Mini MkII can do, and more. Jam sessions with a MIDI keyboard are awkward; they require a computer running software, and most likely an audio interface and separate speakers. Whether you are solo or with musicians, there is something appealing about the immediacy of the Mini Play. As you might expect, the speaker is very small- tinny and not loud. But the headphone jack can connect the Mini Play to a speaker or amp of your choosing.

If you are a pianist first and foremost, entering the world of digital music production, consider a digital piano instead of a MIDI keyboard. To be honest, most MIDI keyboards have very disappointing key feeling if you are accustomed to a piano- they are small, tacky, and not very responsive. More akin to the keys on an organ or synthesizer.

The Alesis Recital Pro is one of the most economically-priced options that still features 88 fully-weighted keys. Speaking from experience, a good digital piano playing a very good piano VST is actually one of the best ways to record high-fidelity piano. The sound and expression is slightly diminished, but will realistically fool all but the most discerning of listeners. To beat this setup, a person would need a well-cared-for acoustic piano, a number of expensive mics, a good room- it’s a huge price jump to beat a digital piano for recording.

Used as a MIDI keyboard, a digital piano can also be used to play any kind of synth or keyboard you desire- though of course they shine when acting like pianos. The relatively slow weighted keys are not ideal for synths or organs. Digital pianos have their strengths and their limitations.

Best Step Up: Roland A Series

Most of the recommendations I have made thus far have been ideal for first-time MIDI keyboards. But as you build your skills and your ambition, you are likely to run into the limitations of these keyboards. Really, 25-32 keys isn’t many- good luck playing with two hands at once. And the gear I have mentioned so far is not of the highest build quality. Serious gear tends to be better engineered to last.

Once you are ready to move up, Roland is one of favorite companies for mid- to pro-level gear. The brand has an impressive resume, with iconic synths like the JUNO and drum machines like the TR-808. To this day, Roland’s gear tends towards solid build quality, moderate prices, and a well-deserved fanbase.

The A series includes 32-, 49- and 61-key MIDI keyboard models. In particular, the 49- and 61-key models are excellent bang for the buck. They all feature programmable drum pads, sliders, and knobs. Essentially, the Roland A-series can do anything the MPK Mini MkII can do, but more and better. A semi-pro or even pro musician can use these keyboards as their primary keyboard and control surfaces.

And there you have it! If you are interested in the AKAI MPK Mini MkII, this guide should give you a great look at alternatives. No matter how you are approaching music production, your skill level or budget, you have great options to invest in a powerful MIDI keyboard. Jamming and sequencing music is just one part of the process of creation- if you are stuck on the mixing and mastering parts, don’t be afraid to reach out to professional services. They can be more affordable than you would expect, and a great resource to learn by example. Good luck and feel the joy of the music!