We’ve all seen it. The guitarist who could be more accurately called a pedal collector with a guitar. The player who runs their instrument through so many layers of effects that it’s hard to know what is doing what, exactly. Let alone how the instrument sounded in the first place. Not for nothing, an entire genre of music called shoegaze is based on these guitarists, who gaze at their shoes as they cycle through effects on stage.

But why should guitarists have all the fun? Comparatively, bassists are known for a more “plug-and-play” approach. A compressor pedal is often the only thing a bassist has at their feet, if anything. But this is leaving so much on the table! The bass is a powerful instrument- I like to say that people often don’t pay much mind to exactly how much it’s adding until it’s taken away. The bass provides the foundation, the low- to mid-frequency power and depth.

I’ve written before about the possibilities you can unleash by playing bass with envelope filters and even reverb pedals. But have you ever considered how flanger can be used on bass?

Listen for yourself. The most famous bass flanger is probably the light, tense funk playing in For the Love of Money by the O’Jays. And how about Tempus Fugit by Yes. Chris Squier is one of the most slept-on bassists, in my humble opinion, because the entire band were such monstrous musicians.

What's Inside show
What is a Flanger?
Flangers for Bass
Boss
BF-2 vs BF-3
Electro Harmonix
MXR
Earthquaker Devices
Conclusion

What is a Flanger? 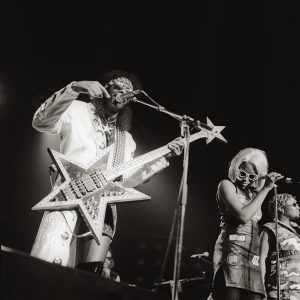 The flanger effect is somewhat confusing. It doesn’t help that there are some competing theories about when it was invented, how it was named, and how it compares to phaser. In fact, the original flanging effect was made by messing around with the attributes of tape machines. Modern flangers and phasers both originate from these experiments.

Flangers are most effective when used on tracks with a thick or saturated tone. They’re popular on guitars, or often used as a momentary effect on drums or vocals- check out the line “Dynamite with a laser beam” from Killer Queen for an iconic example. So on bass, flanger will be used to greatest effect when the treble and mids are cranked on your instrument, and a compressor pedal or even some subtle overdrive to crank your tone further is not a bad idea.

Technically, you can use a guitar flanger pedal (or pretty much any guitar pedal for that matter) with bass. But guitar pedals are designed with guitars in mind, which play a different role in bands from basses. Some effects, flangers included, might cut your bass frequencies in the name of warping your sound. That’s well and good for guitarists, but obviously could be a problem for bassists. Read on for some recommendations for flanger pedals that bassists enjoy!

Boss is one of those companies that you can really count on. Where even if you know nothing about the different options available, the Boss offering is probably a reasonable price and does the job well. Sure, Boss usually isn’t the greatest option on the market, but then again, sometimes it is. The SD-1 distortion/overdrive is a classic for a certain guitar tone, for instance. And many pedals were introduced in their modern form by Boss, like digital reverb.

The Boss BF-2 is a classic flanger, associated strongly with flanger’s widespread popularity in the 80s. As such, the tone is inextricably tied to that era. And while it’s out of production, it’s still pretty easy to get your hands on. Meanwhile, Boss now manufactures the updated BF-3.

And in terms of feature set, the BF-3 is a worthy successor. The Boss BF-3 now features dedicated bass and guitar inputs, as Boss is aware the BF-2 was pressed into service with basses on more than one occasion. The formerly mono output now has a stereo option- did you notice the satisfying stereo effect on the O’Jays tune?

And the BF-3 now has an additional mode-selecting knob, allowing you to choose between a few different presets for greater variety of expression. Bassists speak highly of the gate setting, which creates a uniquely immersive tone, and the temporary setting, which only engages the flange while the pedal is physically pressed down.

That said, you’d think the BF-3 would be the obvious choice of the two- but it’s not necessarily the case. Most people prefer the BF-3, especially because it maintains low end better, but some prefer the old-school sound of the BF-2. In fact, one forum post maintained the BF-2 “just sounds good.” That’s the kind of subjectivity you can’t really argue with, you either agree or disagree. So listen to some samples of the BF-2 and BF-3 to compare.

I’m not about to argue with the company responsible for the classic Big Muff Pi fuzzbox. On top of that, Electro Harmonix re-issued the discontinued-way-too-soon Mu Tron III envelope filter. This is the “auto wah” effect that you are likely hearing on any of the funkiest 70s tracks you can think of, such as Higher Ground. So it should come as no surprise that EHX actually introduced the very first flanger stompbox with the Electric Mistress.

The Electric Mistress is still a fabulous choice for bassists. It’s marketed as a guitar pedal foremost, but is well known to be bass-friendly. One forum poster I ran across testified that it does not suffer from any “bass suck,” meaning your low-end will be safe. Like the BF-3, a stereo out is available if you want to send your audience into space. And the Mistress also features a chorus circuit, with the unique ability to blend chorus and flanger at whatever balance you like.

I’m always happy to recommend MXR pedals. I’m a little biased because I have their classic Dyna-Comp pedal, a very simple yet elegantly satisfying compressor. MXR is also the company launched on the strength of the Phase 90, which became a mainstay of the 80s and featured all over Van Halen albums.

MXR’s Bass Chorus actually has a popular bass flanger effect too, despite its name. I’m always happy to see EQ controls on bass pedals (the separate bass and treble knobs on this pedal) because they’re very useful for making sure your bass can still function as a bass in a band setting. They allow you to balance the amount of treble “tone/effect” and bass “low end” to taste.

And for a comparable price to the BF-3, it’s nice to have a chorus effect packaged alongside the flanger. Still, the BF-3 has deeper flexibility when it comes to the flange effect itself, so make your choice with that in mind.

If you’re looking for something basic, I saw a few recommendations for the MXR Micro Flanger as well. It’s small, inexpensive, is not fussy with settings, and sounds great on the bass. What more could you want? As one reddit user put it, “I’m a simple man, I like [it].”

If you find yourself glancing at my other suggestions and asking “yes, but how could I be fancier?” Then here’s your upmarket boutique small-run offering. Earthquaker Devices charges higher-than-mass-produced prices, but they make up for it with great-sounding pedals loaded with options. I’ve recommended their Underneath as a reverb for bass, and now I’m hyping the Pyramids flanger. This is the only pedal I’ve mentioned with a feedback knob. (You can feed a flange back into itself to make the effect more dramatic.)

Beyond that, the Pyramids is so heavy on features that I ought to let the company sell it to you in their own words:

This thing is relatively pricey, it’s very large, and it’s positively splattered with knobs. I think you already know if this is the pedal for you or not- it’s not shy about its approach!

I personally think we are ready for some more funk. Music in the 90s got very droning, with all the grunge and skatepunk and alt. The 2000s followed up with some very forgettable, blah trends in RnB and dance pop. The indie world responded by retreating into introspection and self-importance. Now it’s 2019 and I’m happy to see that some of the greatest hits of the 2010s were funky and downright fun. I mean check out Can’t Stop The Feeling, which was way better than a track written for Trolls needed to be. Or how about Get Lucky, Attention, or Uptown Funk.

I for one welcome the return of this disco funk, vibey pop music. I was worried that we’d seen the end of it decades ago. Get your hands on a bass flanger and you can start grooving too, and who knows? Just ten years ago you would have been a fool, but now you could have the next throwback disco hit on your hands. Keep working, and feel the joy of the music!