The world of music is an unpredictable mix of primitive and cutting-edge technology. Some of the most beloved gear to this day was invented in the 1950s-1960s, including the Shure SM57 (1953), Fender Stratocaster (1954), Neumann U87 (1967), and countless other examples. Yet, since the advent of the digital age, technology has raced forward to change the way music is made (even changing year-to-year sometimes!)

This marriage of tradition and innovation, folk wisdom and scientific precision, leads to a lot of confusing and contradictory advice about music production these days. A lot of commonly repeated facts are simply untrue. Others were once true, or once sometimes true, but are no longer relevant. For example, many people “know” that you should leave 6 dB headroom in a track before mastering. And I said “know” intentionally- because it’s false. At the time of writing (2019) the only true rule is that your mix should not reach or go above 0 dB. But the answer is slightly more complicated. It’s worth understanding in more detail if you want your music to truly shine.

This guide works no matter what DAW you are using to produce music- Pro Tools, Logic, Ableton, FL Studio, Reaper, Reason, or more. And these rules apply no matter your genre; hip hop, rock, pop, indie, metal, punk, folk. The basic concepts are all the same at this stage.

While the phrase “how much headroom to leave for mastering” seems straightforward, many of the basic concepts involved are frequently confused. The most basic being the definition of mastering, and how it relates to mixing. 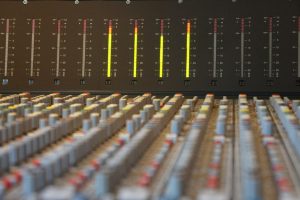 To break it down, “tracking” is the process of recording or creating the instrumental tracks themselves. “Mixing” essentially involves tweaking the levels and tones of the instrumental tracks, so that they work smoothly together. The tracks’ individual levels, EQ, compression, reverb, and more are manipulated so that each track is audible in the way it’s meant to be. “Mastering” is the final step. In this step, the entire mix is processed so it’s the right level of overall volume. EQ, compression, limiters, and dynamic EQ or multiband compressors are used to ensure the whole package has that “finished” professional sheen. The word “producing” is a vague umbrella term that can refer to any combination of writing, arranging, tracking, mixing, and mastering.

Music can be hard to conceptualize, because you can’t see or touch it. One of my favorite metaphors for the process of making music is actually cooking! You’d be shocked how well it works. If a song is a casserole, then mixing is the process of combining the ingredients. Some ingredients are cooked or seasoned independently before entering the dish, some are raw. Mastering is comparable to baking the whole casserole together. 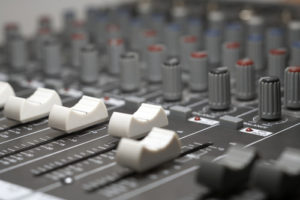 Conventional wisdom states that a mix should peak around -6 dB before mastering. In fact, before doing some more research, I sat down ready to repeat this myth in this article! This is an outdated and unnecessary rule, arbitrary in 2019. That said, it’s not harmful, and there may be advantages to following it anyway. It encourages you not to try to make a mix too loud during the mixing stage, and focus on the sound of the mix.

This rule harkens back to analog and earlier digital days. Headroom is a trickier concept in analog recording, because tape does not have nearly as much room for error as digital recording. Tape is far noisier than digital recording. Recording too quietly means the track starts to get lost in the tape hiss, and too loudly means it gets distorted. And in early digital days, software was still being developed and calibrated, and memory was at more of a premium. Without diving too far into the technicalities, the -6 dB myth was relevant in those days, because it was less likely to introduce unwanted noise from processing.

Cut to 2019, present day. Recording in 24-bit is standard, with effectively unlimited headroom. Software and plug-ins are finely tuned. A mix that peaks at -12 dB, -6 dB, -3 dB, or just below 0 dB is equally suitable for mastering.

Why Peak Below 0 dB

Music volume is measured in an unusual scale. It’s backwards- almost all values are negative, and the highest possible point is 0. There is a reason for this. This is the point that the volume of individual instrument tracks, or of the master, should not pass. Any sound that goes above 0 dB gets “clipped” meaning everything above 0 is cut off. Clipping has an electronically distorted sound. While certain kinds of distortion sound killer (like a vintage soul recording or a Van Halen guitar solo) digital clipping is NOT cool. It’s a grating and unpleasant sound, and it doesn’t improve your mix.

If you’re going to walk away from this article with any knowledge, let it be this. Simply because the amount of headroom for mastering is more flexible now, this does NOT mean there are no rules! Dynamic range is more important now than in the past. The biggest mistake mastering engineers tend to see is an overly-compressed mix.

Music producers have known a simple truth for decades. The louder a mix is, the more listeners will enjoy it. This was the basis for Phil Spector’s iconic wall-of-sound philosophy in the 1960s and 1970s, and the loudness wars of the 1990s and 2000s (see the photo for an example of the loudness wars. The same recording was re-released progressively louder.) Yet, music can’t be increased in loudness indefinitely. Back to the cooking metaphor. We all know that salt and fat make food taste better, but we also know how too much of these can ruin food. Further still, we know how we can get burnt out on eating salty and fatty food for too long- and how it can be bad for our health.

Remember when I said digital clipping sounds bad? Check out the recording of “Californication” by Red Hot Chili Peppers, widely considered one of the most tragic victims of the loudness wars. You may have not noticed before, but the grating distortion throughout the album is hard to ignore once you hear it.

Loudness Comes During Mastering, Not Mixing

When mixing, one of the best general tips is to listen to reference mixes to improve your own. Yet, anyone who has tried this has probably realized just how loud professional recordings tend to be. The temptation is strong to match this loudness while mixing- after all, louder sounds better, and in fact louder sounds more “professional.” When mixing, do not expect your track to be nearly as loud as the pro tracks. These are already mastered, and the loudness should be achieved in that stage, not the mixing.

When mixing, I advise against using a limiter on the master bus. Again, the temptation is obvious. It allows you to make your mix louder and “beefier” without passing the dreaded 0 dB threshold. But a limiter accomplishes this by compressing the mix, which squeezes the dynamics out of it. If you send a compressed mix to a mastering engineer, they can’t recover the dynamics you have lost. It would be like trying to unscramble an egg.

Compression Is Not Evil

I have seen some producers take advice like this to an irritating extreme though. Some musicians are now getting on message boards and encouraging each other to use as little compression as possible throughout a mix. This is an absurd attitude to take. It’s valid in some contexts. But many genres use medium or even heavy amounts of compression on individual instruments as part of the sound. “Avoid compression” is painting with too broad of a brush. Yet another great food metaphor- in the 90s a lot of people started avoiding fat in their diets. Low-fat versions of food were released, that often replaced the fat with sugar so it still tasted alright. In hindsight, we now realize that there are healthy ways to eat high-fat diets, and the high-sugar alternatives were actually far worse for our health!

To simplify and summarize. Use whatever compression you want during the mix process. This could involve compressing individual tracks, or compressing busses of tracks together, or any combination. But do not use compression or a limiter on the master bus while mixing. Leave that for the mastering process.

I’m a freelance songwriter and producer, and I’ve done a fair amount of mixing and mastering as well. Here are some screenshots to demonstrate my advice- it’s useful for learning what to look for.

Here is the waveform of one of my original songs, “Stop Falling in Love.” This song is an indie pop/rock track with guitars, bass, drums, keys, and some orchestral instruments- strings, trumpets, and saxes. This waveform is of the unmastered track, with no limiter or other mastering plug-ins applied. Most of the track peaks around -3 dB but there are some stray drum hits that peak close to 0 dB. Notice how dynamic the waveform is- this mix has lots of musical dynamics, and is ready to be mastered.

Here is the exact same file, but the master volume is turned down lower. Most of the track peaks around -6 dB, with a few peaks around -3 dB. It’s overall the same shape waveform, but you can see that it is quieter because it’s thinner. This track is also fine for mastering. As I mentioned, 24 bit recording has very clean gain, so the mastering engineer can easily raise the volume as much as necessary without risking any loss of quality.

Again, here is the same unmastered mix, but the master volume is very low here. It peaks around -12 dB. A mastering engineer could probably still work with it (as I said, modern digital gear is very powerful) but you would raise some eyebrows. There’s simply no reason to export tracks this low.

This time, I have used a limiter to increase the overall volume of the track. The waveform still does not peak above 0 dB, but notice the difference in shape. This waveform is far more “squished” which translates to a less dynamic and less musical mix. A mastering engineer would probably lecture you about this. Imagine breaking your arm, and then visiting the doctor wearing a homemade cast. The doctor would probably be able to do a better job, and in fact you probably did more harm than good.

Here’s a common mistake. I used a limiter to make this mix louder, but then I lowered the master volume before exporting. So the mix actually peaks around -6 dB, but as you can see, the shape is equally squished. Lowering the master output after compressing the mix did not accomplish anything, because the dynamics are still lost. Translation: Also wrong.

I have covered the basics of a lot of topics here. There are a couple of important concepts to take away. Anyone who says “export at -6 dB for mastering” is repeating a myth. No matter what, your mix should not pass 0 dB when exporting for mastering. Avoid using compression or a limiter on the master bus while mixing, at risk of losing the dynamics of the mix. Definitely don’t compress your mix, and then lower the master volume. There are ways to make your mix feel louder without resorting to over-compressing the mix- check out our guide. If you are having trouble nailing any aspect of mixing or mastering, don’t be afraid to reach out to a professional service– they can be more affordable than you would think, and a great resource to learn by example. Keep feeling the joy of the music!