It had been coming for a while, but when Kanye West released an album titled 808s and Heartbreaks it was official: The 808 is a legend.

This assertion requires a little bit of unpacking- and translation. “808” is shorthand for the Roland TR-808 drum machine, an early electronic instrument. This unit was only manufactured from 1980 to 1983, was ironically criticized for its unrealistic drum tones, and only sold about 12,000 units before being discontinued.

What's Inside show
The 808 Gains its Voice
808 Decline and Revival
Producing with an 808
808 Sonic Character
Traps to Avoid when Mixing Bass
Clear, Powerful Low-End
Subtractive EQ
Monitoring Bass
Other Options
Mixing Bass to be Audible on Small Speakers
Other Tips to EQ an 808
Conclusion

However, that “unrealistic” tone became its greatest virtue, and in fact its immortal quality. The 808 developed a cult following shortly after its “failure,” largely built upon its deep and booming bass drum sound. Marvin Gaye was an early convert, and helped establish the TR-808’s reputation by using it as the basis for the groove in Sexual Healing in 1982. 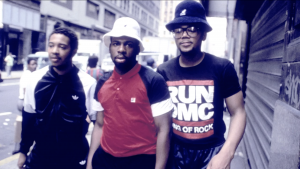 Simultaneously, hip-hop was developing rapidly as a genre. The TR-808 was a natural tool for the hip-hop ethos, the ability to express oneself without a huge budget or formal training. The drum machine was inexpensive on the used market, and allowed artists to create rhythms with limited effort. Furthermore, the kick, snare and hihat sounds were distinct from other genres at the time, which allowed hip-hop to carve out its own distinct sound and identity. By the mid to late 80s, The Roland TR-808 was essentially synonymous with hip-hop music.

(And for a strange diversion, while researching this article I discovered an album worth checking out. In 1982, Bollywood session musician Charanjit Singh released Ten Ragas to a Disco Beat using the TR-808. It went totally unnoticed, but was rediscovered decades later with the fascinating realization that it had foretold the genre of Acid House by more than five years.) 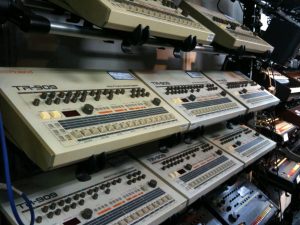 By the 90s, the sonic landscape shifted. Synth and sample heavy productions had oversaturated the airwaves, and were perceived to be less futuristic and more embarrassing. The new sound was organic, with live instruments, and very compressed, saturated, and loud.

For the last twenty years, though, we have run out of technology to shape our sound. In decades past, new inventions allowed for new sounds, but at this point almost any sound is possible. The new trend is to sound old. To search back over the decades, and to create a cocktail of sounds spanning eras. And with that shift, the 808 is back in vogue. A documentary about the 808, imaginatively titled 808, was released in 2015. You can hear 808 beats (or close imitators) in indie crossover like Lorde’s Royals, pop like Beyoncé’s Drunk in Love, and pretty much the entire genre of trap. To use the 808 sound is to recall hip-hop history, and to take pop new places.

To clarify, the TR-808 drum machine had a range of samples, covering kick, snare, claps, toms, hi hat, and cowbell. The snare, hi hat, and especially kick are by far the most commonly used today. In fact, when “808” is used in the shorthand, it refers to the kick specifically.

I once heard that two famous chefs, Jacques Pepin and Gordon Ramsay, can each judge another chef’s skill level by watching them cook an egg. In my opinion, the test for producers is how skillfully they handle bass frequencies in their tracks. When a track’s bass is balanced, it feels powerful and really “grooves.” It makes people want to dance! But when the bass is handled incorrectly, you can risk a muddy mess, or a powerless track with no heart.

And the 808 is a unique challenge. Although the 808 sound was designed to be a kick drum, its use is a little more complex than that. It can actually be used as a kick, as a bass, as both, or as a bassy tone that accompanies separate bass and kick tracks. Furthermore, many beats make creative use of the 808. For example, you can duplicate the 808 sound and apply different kinds of compression, EQ, pitch shifting, and transient shaping to each, and then make a pattern out of the resulting palette of sounds.

To use the 808 sound effectively, you must first understand it. An 808 sound or imitation thereof is available in countless sample packs, but many samples already contain their own processing. Start with the unprocessed sound, which is audible in this video. I used a spectrum analyzer to analyze the actual sonic character of the 808 sound. 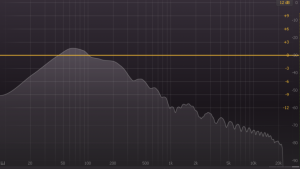 This graph shows the attack- the frequency response of the drum at the moment it plays. Notice that there is a huge presence in the 50-100 Hz range, which is right in the middle of “bass frequencies.” It is also audible in the 20-50Hz range, the “sub-bass” which is felt more than heard. And there’s a slow slope downwards all the way to the highest frequencies. This is the synthesized “impact” tone of the 808. Its sound is comparable to a digital click. 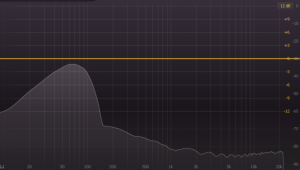 And this graph shows the decay of the 808, captured a second or so after the attack. Notice that almost all of the sound above 200 Hz has already decayed, but the huge 50-100 Hz bump sustains.

So, the 808 sound is a bass-heavy synth sound on impact, and the bass part sustains. The impact gives the 808 its percussive feeling, but the sustained bass frequency is what allows the 808 to be used as a bass track too.

Traps to Avoid when Mixing Bass

See what I did there? Anyway, there are two main issues to avoid when mixing bass frequencies in your track: muddy low-end, and bass sounds that disappear on small speakers such as earbuds, laptops, and phones.

In an effective mix, the tracks that extend down to the bass frequencies (250 Hz and below) should have their own separate frequency ranges. If you are using an 808 in place of a bass and kick, then you probably don’t have any issue. The 808 takes up the 50-100Hz range comfortably, and you may even try boosting 100-200 or 100-250 a bit to give the 808 a rounder, fuller feeling.

But when an 808 is used with a kick and/or bass, take care. All three of these tracks could easily inhabit the 50-250 Hz range. If they are not given their own space in the mix, your mix will sound muddy and confusing. You will be in the unenviable position that the more you add, the more it subtracts.

There are a few ways to approach this. The most common is subtractive EQ. If two or three tracks are using the bass frequencies simultaneously, decide which track is going to get which frequency range, and then create notches in the EQ in the other tracks in that range. I personally fine-tuned my skills with a spectrum analyzer plug-in; this list has free VST options. I like to use a spectrum analyzer to see where each bass-frequency track is powerful to begin with, to inform my decision about which track gets which range.

Being able to monitor bass frequencies is important here too. You may not be hearing bass at full power if you are mixing on headphones, or monitor speakers with cones of 6” or less. I mix on Yamaha HS8 monitors, which have pretty good bass response, and sometimes I use spectrum analyzers to monitor the bass visually as well.

Aside from subtractive EQ, you have other options. Try side-chaining the 808 to the kick, so that the 808 ducks when the kick plays. With this configuration, you may not need to touch the EQ. Though pay attention to the release times and amount of compression. Extreme ducking can sound good or bad, so make sure you don’t duck too much or too little.

Mixing Bass to be Audible on Small Speakers

With the preponderance of smart phones, tablets, laptops, earbuds, and small bluetooth speakers, I would venture to say that the majority of music is played with sub-optimal bass response these days. For reference, pretty much all the sound below about 400 Hz is inaudible on an iPhone 7, and you can extrapolate from that to similar devices with tiny speakers.

Yes, that means that when you listen to music on a small speaker, you are actually not hearing the bass frequencies at all. So how do you still hear the bass and kick tracks? Instruments have the fundamental frequency (the lowest note) and overtones, which are higher frequency parts of the sound that define an instrument’s tone. It’s common in music to boost the overtones in bass and kick tracks in order to give them mid- and high-frequency presence. When you hear that on a small speaker, your brain subconsciously fills in the low note.

Remember the frequency charts above. If you boost the mid or high frequencies of an 808, you will boost the attack of the sound but not much else. This could give you a “clicky” sound that honestly isn’t that satisfying. The meat of the 808 sound is in its sustained tone, but that disappears if you can’t hear below 400 Hz.

The answer is distortion. Tape distortion in particular is a very popular tool for sampled drums like 808s. Distortion adds a sonically pleasing layer of overtones to a sound. LANDR has a great list of free tape distortion VSTs. Try applying the distortion directly to the 808 track, or apply it to a high-passed parallel track so that the low frequencies are clean. With a parallel track, you can add a layer of mid- and high-frequency overtones to the sound to taste. Now the tone of your 808 will come through more clearly over smaller speakers.

This is a good opportunity to explain the roles different frequency ranges play. That’s a very important way to understand EQ- if you inherently understand how different feelings translate to different ranges, you can mix with your ears and not your eyes.

Keep these frequency ranges in mind as you experiment with boosting different parts of your 808 sample.

The 808 is without a doubt one of the simplest yet most powerful sounds of the last century.

If you’re good with tools like FL Studio, you can make the 808s longer and really get creative.  But either way, adding the 808 sound to any track instantly gives the track a recognizable, satisfying “hip-hop/vintage/electronic” flavor. Your track can join the proud ranks of 808-based music. But the 808 is not a simple thing to use. It’s so powerful that it has to be used delicately, or else risk doing more harm than good. If you can’t seem to nail it, consider investing in a professional mixing and mastering service. These services can be more affordable than you’d expect, while also being a powerful tool to learn by example. Keep working, and feel the joy of the music!