Kidding aside. For those not in the know, Djent is a genre, or maybe it isn’t, depending on who you ask. Maybe it’s a fad, or a playing style. Apparently its detractors have been certain it was a short-lived fad for about ten years, but here I am writing an article about it, so there you go. I’ll call Djent a playing style for lack of a better term. 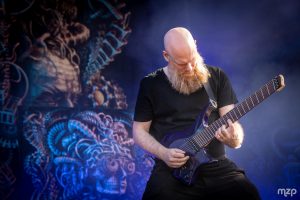 Djent refers to a movement in certain subgenres of metal, particularly progressive metal. Check out Meshuggah, widely credited as progenitors of the style, as well as TESSERACT, Animals as Leaders, and Periphery for some of the best examples. The djent specifically refers to the rhythm guitar tone and playing style, especially used in breakdowns and main riffs. Often, a seven- or eight-string guitar is used, with the lowest string(s) tuned down to match the key of the song. The guitarist jumps between playing notes on the higher strings, and droning on the open lower strings, alternating between open and palm-muted playing. The riff is often polyrhythmic, and shadowed by the kick and snare drum. Overall, the playing is very crisp and clean, with a dry and overdriven guitar tone, and a droning, industrial quality.

Djent may be more easily understood by hearing than by reading. The Djent Compilation YouTube channel has eighty (!!) compilation videos and counting.

Getting the Djent/Modern Metal Tone

As you can plainly see, Djent involves a lot of rigorous debate and obsessive comparison. I’ll be focusing on how to get the Djent tone on an amp specifically. Of course a lot more goes into it- guitar choice, pickups, strings, playing technique, riffage.

There are as many pedal chains as there are players when it comes to achieving true Djent tone. However, there’s enough overlap in recommendations that I can offer a good starting point.

Noise gates are a popular way to achieve the super-high-contrast, loud-quiet-loud effect in Djent. There should be unnatural silence between your noisy palm-muted strikes. This contrast is essential. In fact, try two noise gates, one at the beginning of your chain (to choke any extra ring) and one after (to silence any artifacts of distortion or buzz.)

Djent players like to use compressor pedals to make each string strike dynamically consistent. Counter-intuitively, djent is often played with the amp gain lower than other genres of metal, to make the playing as crisp and clear as possible. To compensate, players like to use overdrive pedals in their signal chain to up their gain. I should emphasize that the desired tone is highly saturated and distorted, but that the gain is best raised before the amp, so that the final noise gate in the signal chain can achieve maximum effect.

Finally, since Djent involves a lot of chugging on low down-tuned strings, the tone is subject to unnecessary muddy frequencies that should be cleaned up. Try an EQ pedal with the lowest few bands dialed way down. 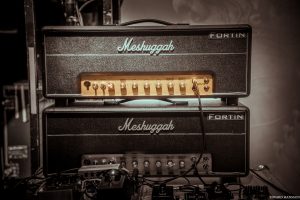 Technically, any high-gain amp can get you where you need to go. But certain models are very popular, and mentioned constantly in Djent discussions. When it comes down to it, your choice of amp will be a subjective personal decision, so try watching demo videos if you are having trouble making up your mind.

While everyone has their own preferences, few would argue with a EVH 5150 III, a Fender-produced head based on a Peavey design; a Peavey 6505+; or a Mesa Boogie Triple Rectifier. The ENGL Savage got quite a few mentions as well. Finally, Bugera is building its reputation with the INFINIUM line. The price is much lower, and players praise the tone to be as good as any. The company’s products have been plagued with reliability and build-quality issues, but it appears they are working hard to turn that around.

When it comes to cabinets, again, the choice is subjective. Orange cabs like the PPC-412 and Marshall cabs like the 1960A are perennial favorites. When it comes down to it, for every person who swears by their amp setup, there is another person who says that Djent is more about playing style or shaping tone than it is about choice of gear.

One piece of advice is ubiquitous, regardless of amplification choice. When shaping tone, cut bass, boost mids to 11, and dial treble to taste. The bass frequencies will just create mud that makes the overall tone sloppy, subtracting more than they add. Whereas the mid frequencies capture the unique blend of overtones and textures that give the Djent sound its character. 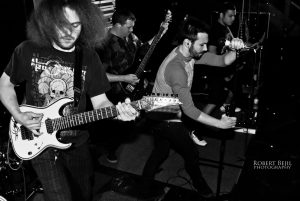 This producer is a huge fan of amp simulators. What a corner of the digital age. My personal music production style tends more to vintage and indie tones, and using IK Multimedia’s Amplitube 4, I have a collection of vintage Fender and Ampeg amps that would cost tens of thousands of dollars and fill a small room if they were physical. I use them every day and I don’t think anyone has ever even asked me if they are real amps or not.

Djent is a movement that grew up around (or maybe even on) the internet, and many players are not shy about digital processing. Some of the most respected Djent bands acknowledge that they eschew physical amps and pedals for entirely virtual rigs.

If you want to go this route, check out the AXE I/O interface aimed at guitarists. The price is a bit steep for an audio interface, but it comes bundled with the full Amplitube 4, which would otherwise cost just as much on its own. Amplitube 4 is popular with metal players for its huge range of models of amps I mentioned earlier in the article, like ENGL, Mesa Boogie, and Orange. The models are famously rich and realistic, and the software has some great unique features, such as the ability to place the amp in different virtual environments, “mic” it with different virtual mic setups, and even move those “mics” around in virtual space to vary the tone!

If you want to check out other amp sims, Fractal Audio’s AXE FX line comes up often. Line 6’s Helix and BIAS’s FX 2 are popular choices for Djent players as well. To further simplify your setup (and protect your wallet), these virtual amps allow for virtual pedalboards as well.

Djent djent djent! Stop reading and make it happen. If you have the perfect setup and you still can’t nail that tone, it might be time to pay closer attention to your guitar, your palm mute technique, or the riffs you are playing. Either way, keep playing, and you will djent with the best. With the right setup and enough practice, you’ll nail it! Keep working, and feel the joy of the music!