If you didn’t sleep through the 00s, you can probably sing the riff to Seven Nation Army from memory. And with good reason. This song’s impact speaks for itself. I actually think it’s the greatest rock and roll riff anyone has written since the 80s, and nothing has bested it since. In a time of beats and synths and pop vocals, the White Stripes managed to craft a rock riff in the tradition of Sunshine of Your Love and Smoke on the Water. Original, immediate. The rest of the entire song flows from the first seven notes. It’s instantly memorable, impossible to forget the second you hear it. Hell, it’s a musical achievement on the level of the intro of Beethoven’s Fifth.

It’s funny then, that this iconic riff, introduced on the bass, was performed by a band famous for lacking a bassist. Funnier still, if you look at the recording credits, you will not find a bass listed for Seven Nation Army. In keeping with the strict guitar-and-drums-and-definitely-not-bass ethos, Jack White actually recorded the bass line with a semi-acoustic guitar played through an octave pedal.

He had most people fooled, myself included. But it just goes to show that a guitar can be pressed into service as a bass, and well. The intro to Seven Nation Army is a better bassline than many basslines I have heard played on bass. And it sounds great too.

To effectively use your guitar as a bass, read on for some tips. Octave pedals are the bulk of the approach, but there’s more to it than that. You can also sculpt your tone with EQ, consider using a bass amp or amp sim, and should be aware of how bass playing style differs from guitar.

If you just pitch your guitar down using an octave pedal, and think you are good to go, then you may be disappointed. It will instantly resemble a bass, that’s for sure. But if you play it like a guitar, it might not sound as much like a bass as you might hope. On the other hand, maybe that’s what you’re into- a bass that does things that a true bass couldn’t.

Role in the Song 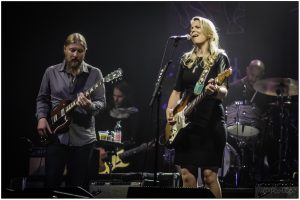 There’s more to a bass than a guitar with four thicker strings. It plays a totally different role in songs. Usually, guitar is used to create rhythm and sonic texture. But it doesn’t drive the rhythm or harmony of the song- it’s more like the guitar enhances it. Meanwhile, the bass and drums work in tandem to form the foundation for the rhythm and harmony.

Put another way, in most songs, the 20-250Hz of the frequency range is almost entirely dedicated to the bass and drums. Vocals, guitars, and keys rest on top of this foundation.

This is the crucial difference between guitar and bass amps- they are designed with these two different roles in mind. To put it simply, if you play guitar through an octave pedal, run into a guitar amp- it will resemble a bass, but it won’t work in the song like a bass. 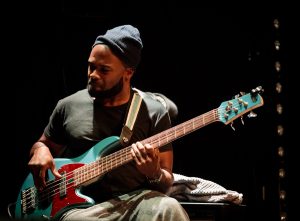 Besides this, it helps to understand how bassists typically play their parts. They tend to play root notes for the most part, and fifths or octaves sometimes. They tend to play along with the kick drum’s rhythm, whereas the guitarist is more likely to follow and accentuate the hihat and snare rhythms in the drum pattern. Listen to bass playing for ideas- it’s a very different animal from being a rhythm guitarist.

Of course in genres that favor power chords, the bass and guitar often follow each other closely. That’s pretty much the idea behind White Stripes’s approach, anyway. In garage rock, since the bass is following the guitar anyway, you can do without the bass. Also see hard rock, grunge, metal, and punk. I recently read that when Weezer were recording the Blue Album, they wanted the guitar and bass to play together, like one giant ten-string instrument.

But even in power-chord-heavy genres, the bass still handles the lower frequencies, while the guitar’s mid and high frequencies are boosted.

Like I said, the octave pedal is still the bread and butter of playing guitars like they are basses. Pretty much every approach involves using one. The obvious starting point is the Digitech Whammy DT. Which you may recognize as the pedal Jack White used on Seven Nation Army. This pedal is not your cheapest option, but its quality speaks for itself. And the whammy functionality is unique and neat. The expression pedal allows you to shift your tone up or down by several semitones, for a false whammy-bar or hammer-on/pull-off effect. Not to mention that the pedal easily allows you to tune down by the half-step, not just by the octave like some other pedals. Great for scratching that doom metal itch without investing in a seven-string guitar.

Also check out Electro Harmonix Polyphonic Octave Generator, or more whimsically, POG. This pedal has a more basic function set. It generates an octave down as well as up. Between those two and the dry signal, you can make your guitar behave like a bass, or like a faux-12 string for some jangly sounds. And check out the separate effect-out and dry-out. You can run the effect-out to a bass amp and the dry-out to a guitar amp for some fabulously weird two-in-one experimentation.

If you want an octave pedal that doesn’t cost as much as a cheap pawn shop bass anyway, try Donner’s. This pedal maker was only founded within the last decade, but went from zero to sixty real quick, and if you shop for pedals you’ve probably come across their wares alongside those of Mooer. Chinese companies, low prices, typically tiny pedals. They probably don’t sound as hifi as your pricier options, but that can work out fine if you just want something inexpensive to get started with. Speaking from personal experience, I own a Donner delay pedal and a Mooer vibrator/leslie pedal. For the prices I paid, they get the job done in style! Decent built quality as well.

If you want to run your octave pedal-guitar rig through a guitar amp, consider augmenting the sound with an EQ pedal. MXR’s and Boss’s offerings are safe bets. Try boosting the 100 and 200 Hz bands and cut everything else. Bass tones tend to be much more muted above 200 Hz, while guitar tones are muted below that point and boosted above. Besides, an EQ pedal is another very useful tool to have in your kit. It unlocks much deeper and finer tone sculpting in general for guitarists. A guitar tone without an EQ pedal is like Barefoot Rosé, and with an EQ pedal you’ll feel like you’re sipping Cabernet from Bordeaux. Well you get the idea.

Here’s a fascinating avenue to explore. Now you can actually shift your low A and E strings down an octave, but leave the other four unscathed. Furthermore you can process the “bass” strings with different effects or even send them to a different amp from the other four strings. Yes, you can truly play guitar with your fingers and bass with your thumb at once.

Check out Boss’s thrilling GP-10 guitar processor. Use it in conjunction with Roland’s GK-3 Divided Pickup. Mount the GK-3 on your guitar, and you can send separate signals for your lower two and upper four strings to the GP-10 for mad-science-ing. This rig is not cheap, but the GP-10’s functionality is so jaw-dropping but I can’t help just listing it straight from the manufacturer:

If any of that piqued your interest, maybe it’s time to buy yourself a present?

Bass isn’t just for bassists anymore. Any guitarist can use some auxiliary gear to enter a yet-unexplored territory. The bass notes, the notes you can feel as much as hear. A whole new sonic texture to add to your palette. The possibilities are really endless. So keep working, and feel the joy of the music!