So often, we listen to music as a stimulant. We crave the rhythm, the melody. We want to feel inspired to sing, move, dance. Ambient music shows the unique power of music, the seemingly magical quality, because it exists for the opposite reason. Ambient music soothes and relaxes. It can add a calm feeling to an environment without detracting. It can help a person focus without drawing too much attention to itself.

So much modern technology essentially takes the form of dominion over random natural forces. Our buildings are as temperature-controlled and sound-isolated as possible. Yet, nature is far from silent. If an environment is too controlled, it can feel sterile and almost spooky. Ambient music is often inspired by the most relaxing natural environments. Distant, echoing sounds that remind us we are not alone. Warm, soothing swells that imitate the calm power of a distant ocean or a light breeze. Slowly shifting soundscapes.

If you want to create your own ambient soundscapes, you have your work cut out for you. With the most basic equipment, you have the power to create immersive soundscapes that feel like an entire world. 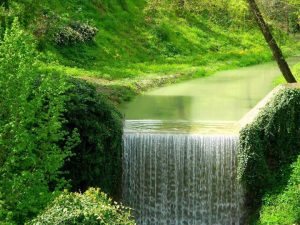 The best way to get started is always to surround yourself with great influences. Visual artists do this with moodboards, so why shouldn’t musicians as well? Listen to some of your favorite ambient music, and familiarize yourself with the aesthetics and feelings involved.

I think it’s literally impossible to write an article about ambient music without mentioning Brian Eno’s Ambient 1: Music for Airports. The indulgently discerning Pitchfork named this album as the greatest ambient album of all time, and it’s hard to argue. Eno even invented the term ambient, for this amorphous genre that was often referred to with synonyms such as “atmospheric.”

Ambient music is a fairly diverse genre though. Since the genre is more about the destination, the journey can take many forms. That is to say, ambient music is defined by its goal to create unobtrusive sonic moods. Sometimes this involves traditional melodies, sometimes it’s just sustained chord progressions. And sometimes it could barely even be called music; more of a soundscape, with few traditional notes. That said, as you listen to more, you will notice the threads that run through ambient music. Try Terry Riley’s A Rainbow in Curved Air, The KLF’s Chill Out and one of my personal favorites, 猫 シ Corp. – A1 – Palm Mall.

Ambient music tends to have a few elements in common. Rhythms are very light, and don’t usually involve percussion. Percussion makes music feel more rhythmic and driving, so any percussion in ambient music is more often about texture than rhythm. For example, swelling cymbals, wind chimes, and rain sticks.

Ambient music moves, because all music does. But ambient music tends to move much more slowly. The tempos are slow, and ideas are repeated more times before shifting. There is not a focus on “capturing attention” or being “catchy.”

Sonic texture is quite crucial in effective ambient music. All music, and indeed all sound, is made up of complex combinations of frequencies. The deeper a person gets into music production, the more they realize that different ranges of frequencies are actually associated with very different emotions and uses, in much the same way that green is a calming color and red is exciting.

You can follow this guideline with your ears, or you can use a spectrum analyzer and EQ if you want to get more scientific. Frequencies between 250-500 Hz are known to feel “warm.” They are one of the reasons we associate vinyl records with a warm sound- vinyl is not great for bass, so engineers would boost these low-mids to compensate. A lot of ambient music features sustained warm tones in this range.

The frequencies around 1500-3000 Hz have a very “present” and “in-your-face” quality. Ambient music frequently cuts in this area, as anything that’s prominent in this range tends to grab attention, and in fact its tiring to listen to for long periods- the opposite of ambient music’s goal.

A lot of beautiful shimmering textures happen in the 5k-10k Hz range. You can play with this in ambient music. Try bringing it out more in the more “saturated” or “full” moments in the music, and back off in more contemplative moments.

Finally, 10k-20k Hz is a very detailed, textured range. In typical music production, you hear a lot of “sizzle” and percussion and vocal syllables in this range. I recommend dulling this range a bit. It tends to grab attention and add energy. 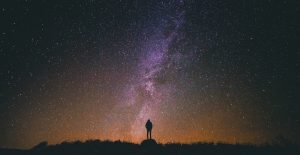 Since ambient music aims to be atmospheric- to create or contribute to an environment- the use of reverb can be highly effective. The rules of reverb are a bit different than other types of music production. In ambient music, you can go heavier and wetter on the reverb, because it’s not so crucial to hear the details of the original sounds. Usually in music, it’s important to avoid too much bass and low-mid presence in reverb tails, because this leads to a muddy mix. In ambient music, this can actually be a virtue. The music moves more slowly, so reverb creates less mud, and low-mid reverb can simply add more warmth and power to your sound.

Play with the psychoacoustic rules of reverb as well. We don’t consciously think about it much, but in daily life we actually hear reverb constantly, and use it to understand what kind of environment we are, how close a sound is, etc. You can play with these perceptions to create an immersive environment. Reverb with a longer tail sounds like a larger and more open space, whereas a shorter tail sounds like a smaller or medium room. Dryer sounds are perceived as closer, wetter as more distant. High-pass sounds to make them sound more distant too. Bass frequencies decay more quickly over open spaces, so distant sounds are mostly mid and high frequencies. Lower frequencies either sound very close or very powerful. Have fun playing with these, and with panning, to create aural collages. The Palm Mall album I linked to above makes great use of this.

Creating electronic music requires very little physical gear these days. We are a long way from the 70s, with Stevie Wonder’s hilariously impractical electronic partner. A laptop, audio interface, MIDI keyboard, and decent set of speakers or headphones is enough to create professional-level music in 2019. Check out the Focusrite Scarlett 2i2 and AKAI MPK Mini MkII for an excellent entry-level interface and MIDI keyboard respectively. (As chance would have it, I have also written articles discussing your alternatives for both- read here and here.) A good pair of neutral studio monitors or headphones is absolutely crucial. Imagine trying to work on a painting while wearing smudged glasses. How can you create great music if you can’t hear how it really sounds?

A Digital Audio Workstation (DAW) is essentially a virtual music studio. These programs play the role of tape machine, and as a host for sampled instruments, synthesizers, and audio processing effects. There are dozens of choices these days, but you’re best off just picking one and learning it. Different DAWs shine in different contexts, but broadly speaking, they can mostly do what all the rest can. Popular choices for the electronic-heavy genres such as ambient include Abletonhttps://www.ableton.com/en/ and Fl Studiohttps://www.image-line.com/flstudio/. I also love Reasonhttps://www.propellerheads.com/ which has a unique interface that imitates live synths and rack-mounted effects.

Ambient music tends to favor certain kinds of synth or sampled instruments. Pads, and especially warm pads are extremely popular. “Pads” refers to synths ideal for playing sustained notes and chords, to create textures and to “pad” the sound. They were popular in the 80s and 90s in music production- check out the piano sound of Bruce Hornsby’s The Way It Is, backed up by heavy pad usage. Pads resemble swelling orchestral chords, but usually have a more muted and less textured quality. Warm pads in particular are essentially swelling low-mid frequencies, and can be used as individual notes or to play chords. Many ambient tracks use pads in the forefront of the arrangement.

Other popular sampled instruments include piano and electric pianos, acoustic guitar, chimes, world instruments like pan flutes and thumb pianos, and mellow synths. Most DAWs come with their own proprietary instrument libraries, but they are usually limited. It may be worthwhile to invest in a third-party library that specializes in ambient sounds, such as Soundiron Holy Ambiences, Ambient Soundware, or BigFishAudio’s Ambient White. Supplement your soundscapes with sounds from free sound effect libraries such as Freesound. You can find ambient sounds like running water, wind, light traffic, rain, and other white noise to loop in the background.

There are countless reverb VSTs available. I personally use Voxengo’s OldSkoolVerb regularly. This is one of the greatest free VSTs in general. It’s not great for drums and percussion, but that won’t be an issue with ambient music. It’s simple to make your sounds drier or wetter, to change the perceived size of the space and reverb tail length.

Reverb plugins can cost a silly amount of money for the best out there. Other budget-friendly options include Waves plugins such as Abbey Road Plates and H-Reverb. Buying Waves plugins is a humorously inefficient process. If you are willing to wait, virtually all of their plugins occasionally go on sale for about $29/each, at irregular and unpredictable intervals.

It’s easy to teach gear and overarching production principles. It’s harder to teach someone how to write original music. Particularly because people understand music in different ways- some people learn piano and like to see sheet music, some learn music by feeling or by chords and patterns. When it comes to writing original ambient music, your starting point depends on your music theory level.

If you are a true novice, try learning some major chords. Use your DAWs piano roll to draw in a progression of 2-4 sustained major chords that repeats. Play around until you find a sequence of chords you like. There are no right answers in music- if it sounds good, it is good. Try repeating the chord progression 4-8 times, and gradually weave other instruments and sound effects on top. If you balance your sounds properly, this will be on its way to a complete ambient song!

Another option, if you’re not sure what you are doing, is to pick up a book of easy piano sheet music, or of lead sheets. Try copying some of the melodies or chord progressions, but play them on ambient instruments with a much slower tempo. This could also give you a starting point to create an ambient soundscape.
Generally, when you write ambient music, arrangement is important. Some ambient music has melodies, and some doesn’t. But when melodies do come, they tend to be slow, repetitive, and rhythmically simple. Don’t use too much movement in your arrangement at once. Keep things simple, light, and airy.

Pitchfork described Brian Eno’s goal as “creating music that could color the air to suit certain moods—the sonic equivalent of perfume, or air freshener.” Ambient music acts very differently from other genres, and is possibly the least obtrusive or flamboyant genre of all. The music exists not to create a new feeling, but to nurture natural feelings, to enhance an environment without detracting from it. Really, when it comes to creating ambient music, it’s a deceptively delicate craft. Effective ambient music must be balanced, modest, yet secretly powerful. There’s no substitute for the time spent perfecting the music. To immerse yourself in great ambient music, to imitate what you like, and to deeply listen to your own creations. Have fun, and feel the joy of the music!