Okay, I’m a bassist so I’m biased as all hell, but I am going to make a bold statement anyway. The bass is the most universally important instrument. From old-school jazz bands, to rock, funk and disco. From pop to hip hop to punk. Across all these genres, you may or may not have singers, brass instruments, keyboards, any manner of guitars. You may have a drum machine or a drummer with a kit that would make Garth blush. But they all have one thing in common. The bass is driving the music forward. Providing the foundation for the feeling, the basis for the harmony, and usually the rhythm as well. Most people don’t realize how important the bass is- but they sure miss it when it’s gone.

There are so many approaches to take to the bass though. Just compare the neo-swing upright bass sound in Love Cats to Flea’s distorted basscore that storms through the intro in Around the World. 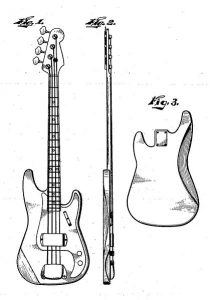 The double bass’s sudden disappearance in the early 60s is easy to defend. After all, an upright bass is a beautiful, complex instrument. But it is also very expensive and about the size of a person. Bands were getting louder and the bass was struggling to keep up. With the invention of the Audiovox Model 736 “bass fiddle” in 1936, and the subsequent popularity of Fender’s 1951 Precision Bass, all these problems with double basses were conquered in one fell swoop. The bass guitar was much smaller, more affordable, and easy to amplify. Its relatively punchier and more immediate tone vibed with the developing rock and pop aesthetics. And its sharper tone and longer sustain opened many doors for the bass. It could be used in all sorts of new and interesting ways. We certainly wouldn’t have funk if we were confined to the upright bass.

But for all its attributes, the electric bass can’t truly replace the double bass. Listen again to the intro to Love Cats. Or check out one of the upright’s finest moments, leading the arrangement in Miles Davis’s definition-of-cool “So What.” The upright bass has this deep, contemplative, organic tone. And sometimes, nothing else will do. But fear not, because dropping a few grand on an instrument that won’t fit in most Japanese subcompacts is not your only option. If you are an electric bassist, you can take steps to get a surprisingly convincing upright bass sound. I have even heard stories of other musicians hearing these techniques from a distance, being sure that they were hearing an upright, only to be floored to find an electric bassist. Looking quite smug, I’d expect. 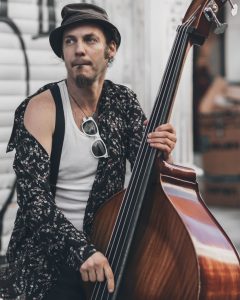 It’s helpful to understand the goal conceptually before simply trying random tips you find on the internet. You probably don’t need me to explain to you how an acoustic and electric guitar sound different from each other. But you may have never thought about it this way- an upright bass and electric bass sound every bit as different, and for similar reasons. Acoustic instruments are designed to amplify and project the vibration of the strings using the resonance of their bodies. Electric instruments can have almost totally acoustically “dead” bodies, and rely entirely on the electronics for amplification. Just look at Marty McFly’s guitar in the opening of Back to the Future. That guitar would sound like nothing if it weren’t plugged into that comically oversized amp.

How does this all translate to actual tone? First of all, the double bass’s note tends to have a much softer attack, and decay more quickly. The note takes a fraction of a second to build in the body before projecting, and doesn’t hang around as long. Whereas an electric bass has the pickup immediately next to the string, so the attack is instantaneous.

Attack and decay aside, the tones are tremendously different. You don’t perceive much tone in a bass’s fundamental frequencies. The differences are heard in the overtones- the mid and high frequencies of the sound.

To achieve that upright tone, there are a number of avenues you can explore. From playing style, to bass and strings choice, to auxiliary equipment.

How to Get Upright Tone from an Electric Bass 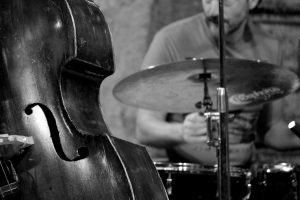 The easiest thing to change is your playing style. First I probably don’t need to say this, but don’t use a pick. That sharp attack is the last thing you need.

A couple of competing techniques are recommended to emulate a double bass on electric. Some people recommend playing very close to the bridge, and palm-muting the strings as you play. In a very immediate way, this resembles the envelope of the double bass tone. The darker tone and shorter decay are reminiscent of that pizzicato pluck. But when you listen closely, the overall tone is not that similar to a double bass.

Alternately, try playing higher up the instrument than you’d expect, over the top of the neck. Try to pluck the string with one finger, tilted at a 45° angle. This maximizes the surface area of flesh-to-string contact, and is similar to the hand technique that double bass players use. It gives you that softer attack, and playing over the neck is the point at which the strings have the lowest tension. Thus, allowing the tone to develop more slowly, just like an upright would.

Also experiment with using your thumb, in either playing position. I do this from time to time, and it certainly lends a round and soft “pizz” tone.

I’ve never tried it, but I saw another recommendation to fret with your finger directly on top of the fret, as opposed to the typical space between frets. I’d wager this gives a darker and less sustaining tone, similar to palm muting.

If investing in a new instrument is an option, but an upright is impractical for reasons that probably don’t need to be explained, you can choose an instrument that facilitates that upright tone.

Fretless basses have been around for decades- Jaco famously declared that his Fender Jazz Bass’s frets were “speed bumps” and ripped them off himself. Obviously upright basses don’t have frets either. Playing a fretless gives that subtle tonal and tuning variation, as well as that lovely warm slide that a fretted bass just can’t match.

Acoustic-vs-electric doesn’t have to be a strict dichotomy. Many hybrid instruments exist. I have heard anecdotes of bassists who achieved satisfying imitation upright by playing violin basses (as Macca iconically used in Beatles performances). Alternately, an acoustic bass guitar (ABG) with piezo pickup will capture that bass resonance and attack that no traditional electric can get.

This recommendation will surprise a lot of people, but have you heard of a ukulele bass, otherwise known as a U-Bass? Okay, it’s true, they make a somewhat curious initial impression. After all, we associate a ukulele with a diminutive sound. See for yourself, though. The U-Bass does an amazing double bass impression. And you can’t argue with that level of portability! Just be prepared to turn some heads.

As it happens, I briefly recorded a band who played an Americana-roots style of music. The bassist played a U-Bass, and it looked very curious next to the guitarist’s vintage acoustic. But they sounded fantastic! The U-Bass really nailed that deep, contemplative tone, and it complemented their sonic aesthetic very well. 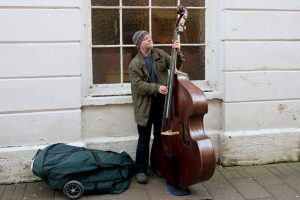 String choice can make a really big difference! Much of that metallic “sizzle” that we associate with electric basses over uprights comes from the strings. Most electric basses are fitted with roundwound strings, most likely nickel-steel or stainless steel. Translation: when you run your finger down the string, you feel the bumpy texture of the winding.

Double basses use flatwound strings, which are smooth down their length. And electric bassists have their choice of flatwound strings as well. They are usually installed by default on fretless basses, but they sound great on any bass! I have a fabulous Danelectro DC 59 with flatwound strings at the moment, and I love the vintage round tone I get.

Once you get over the sticker shock, I saw numerous recommendations for Thomastik-Infeld Jazz Flats (please ignore that these are mislabelled, humorously, as “accordion accessory.”) TI is most famous for their violin strings- they invented the synth-core strings that are still the gold standard for violin strings forty years later. Bassists rave about the tone and lifespan of these strings, and testify they are well worth the price. The packaging even boasts of the jazz flats’ resemblance to a double bass tone.

I also saw enthusiastic recommendations to go one step beyond mere flatwounds, for nylon tapewound strings. D’Addario and RotoSound are popular choices here. Look no further than the reviews, for testimony after testimony to their upright credentials.

Some extra gear can further polish and shape your upright tone. For all my bass experience, as well as interest in 60s rhythm bass legends like James Jamerson and Donald “Duck” Dunn, I actually learned of a crucial ingredient of their tone this morning. It turns out that basses in the 1960s were sold with a piece of foam under the strings. It played a similar role to the palm-mute playing style I mentioned above. The foam mute gives the basses a darker, rounder tone, reminiscent of uprights. And while I can’t recall seeing a modern bass that advertises stock foam, check out products like this to pick up where Motown and Stax left off. In fact, I read that the humble scrunchy is excellent in this role as well- not to mention an opportunity for style points on stage.

You can further sculpt your tone with pedals. Compared to the electric bass tone, the upright is warmer and less sharp. That translates to EQ. Using your amp, or an external pedal like the BOSS GEB-7, boost around 100 Hz and cut above 800-1000 Hz.

A compressor could effectively help you further capture the attack and decay of an upright bass. Seymour Duncan’s pedal has a very useful attack setting. Using the attack parameter, you can create a bass tone that builds over a fraction of a second rather than hit all at once- just like a double bass does. And while it’s somewhat pricey for a pedal, compressor pedals are also generally very useful for performing bassists to have. They even out your volume while preserving your soul and expression. Trust me, the rest of the band (and audience, and sound engineer!) appreciate that.

Well, don’t show up to a rockabilly rehearsal with these tips, hoping you can get by with your electric bass. A real upright is pretty much a must in that situation. But otherwise, you can really capture an amazingly convincing double bass tone. It jives well with jazz and blues bands, acoustic and folk, ballads, musical theatre pits, and more. Keep working, and feel the joy of the music!