Is there a world of music with more debate over genre labels than EDM? I’d estimate there are ten thousand EDM genres at this point. As soon as a track invents a new genre, somebody gets on the horn to complain that the second track in that genre is not truly of that genre. Maybe there are as many genres as there are EDM tracks.

So when talking about how to write in a particular genre, I think it’s necessary to paint with a very broad brush and be vague. For example, since Hardstyle was invented in the late 90s, it has evolved and changed. It’s crossed over with other genres. I’m sure it’s easy to find two hardstyle tracks that sound nothing alike. Regardless, we can all agree that this is hardstyle, pure and simple. 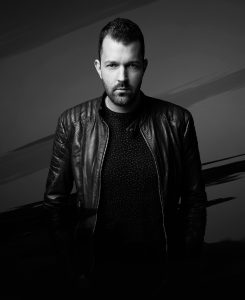 So what makes classic hardstyle? It’s a mix of specific musical elements, and overarching attitude and aesthetics. I always recommend listening to lots of music when trying to nail an aesthetic down. Listen to more tracks by Headhunterz, Wildtylez, and Blademasterz/Brennan Heart and consider that your “required reading.” And maybe add a couple “Z”s to your name. (Just kidding… maybe.)

In terms of aesthetics, hardstyle is dark and intense. It’s aggressive and it’s not slow, the beat drives. At various points in hardstyle’s history, the tempo has varied, but it’s always been high as far as EDM is concerned, spanning from 135 up to 160. And yet, the genre has a positive and uplifting side. Just as often as hardstyle is angry, it’s also motivational. Sort of “I’m mad as hell, and I’m not gonna take it anymore!”

In terms of instruments and sounds, there are some specific common elements to get a handle on. The biggest is the kick, which could even be called the defining sound of hardstyle music. When the kick drops, it removes all doubt about a track’s hardstyle status, and really gets the crowd moving. Other than that, hardstyle makes heavy use of saw synths, trance bass, and digital distortion, which is used to create industrial-sounding detuned screeches and whines.

To get started, you will need a certain amount of hardware. EDM is a truly amazing music movement because it requires so much less equipment than music used to require to create. Technically speaking, a decent laptop and a pair of headphones could get the job done. Realistically, you are going to need a little more.

An audio interface such as the Focusrite Scarlett 2i2 or similar is a necessity with any kind of home studio. MIDI keyboards such as the AKAI MPK Mini MkII and its competitors are powerful tools for electronic music. They enable musicians to quickly browse sounds and samples, write and play melodies and rhythms, and apply automation effects to their tracks. And finally, a good pair of neutral studio monitors or headphones is absolutely crucial. Imagine trying to work on a painting while wearing smudged glasses. How can you create great music if you can’t hear how it really sounds?

Hardstyle is a very synth-heavy genre. Your DAW, or Digital Audio Workstation, is like your virtual music studio, which is used to host virtual synths and effects modules, write and arrange notes, and mix and master the final sound. Certain DAWs are great for EDM producers, as their functionality is specialized for this genre. Furthermore, since they are popular, there are countless tutorial videos and articles to get started. Among these DAWs are Ableton Live, FL Studio, and Propellorhead Reason.

You can get started with the default sounds included in your DAW, but to really excel as an electronic producer, you should either get a great soft synth (software synthesizer) such as Native Instruments’s Massive and learn how to use it to shape synth sounds. Or, invest in a library such as Dune or Omnisphere that is known for having great presets. That could be a good way to get started. Even simpler, maybe you’ll come across some great free sound packs that are good for hardstyle.

Finally, for hardstyle, find some great distortion plug-ins to enhance your sound. Distortion is a critical component of hardstyle music, as it adds aggression and excitement. Hardstyle with no distortion will sound very bland and flat. You have so many options here. The Audio Damage Kombinat, iZotope Trash 2, and Sound Toys Decapitator are popular with pros and amateurs alike. And if you are not ready to invest big money, vst4free has some decent free plug-ins to play with. 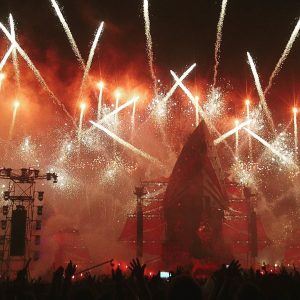 Let’s be honest, it’s music. It’s creative. I can’t sit here and give you steps to write a song, because everyone is starting from a different level of musical knowledge. But I can give you some broad advice about how to approach hardstyle music, assuming you have some basic musical background.

One Blade is a good starting point to understand how hardstyle music comes together. Listen starting from that link, which is where the beat (the kick) drops. As I said, that drop is usually where hardstyle really distinguishes itself and shows its character. Notice how there’s actually not that many sounds happening at once, but the sounds are all really massive, fat, and aggressive. There’s the kick, of course, which I will get to soon. There’s also a low lead synth, acting kind of like a bass. It’s run through some heavy distortion, and has some variations here and there in terms of rhythm or automated filters and reverb to keep it interesting. Meanwhile, some distorted and detuned synths play notes here and there, like stabs in the sonic fabric. These elements together are forming a basic hardstyle rhythm.

Starting with the basic beat, you can gradually expand upon the sound. Notice how at 1:33 some light percussion like cymbals and high drums sounds enters to make the whole sound grow.

Later, at 2:39, after some cool downs, a new synth lead appears. This is a great hardstyle lead sound, and you can create something similar by starting with a basic rave synth, play with its filter and resonance settings, and run it through some distortion plug-ins. The melody is repeated, and filters and reverb are used to make it grow. Gradually, snares and other percussion roll in to emphasize the build-up. Finally, at 3:19, another even more powerful drop happens. The hardstyle kick returns, and combined with the lead synth melody, it makes for a truly exciting dance moment. Notice that even though this is the big crescendo, there are not that many different layered sounds playing at once- it’s more about making the individual sounds, like the lead and kick, as massive as possible.

How to Make a Hardstyle Kick 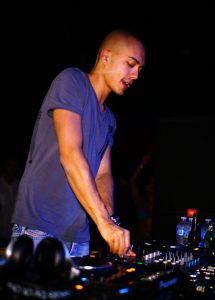 I’ve danced around this a bit (see what I did there?) but it’s the final and crucial piece to making hardstyle. A great hardstyle kick, playing 4 on the floor, is enough to pump the crowd up before any other instruments have even entered. The secrets to hardstyle kicks are layering and distortion.

A typical kick sound has most of its power in the bass frequencies, perhaps 20-100 Hz, with little else in the higher frequencies. Layer multiple kick samples to create a kick with more presence and grit. Play with the pitch (or tuning) of the kicks. This is hard to pinpoint, but essentially, every kick and every drum hit actually has its own “note” based on its frequency. If the notes clash, it could diminish the power of the drum sound, and if the notes sound harmonious or match, it could amplify. But in some cases, you want some dissonance as well. So all I can really say is to play with it, and trust your ears.

Distortion is extremely important in hardstyle kicks. Technically speaking, distortion adds lots of high frequency sound to its source- that’s why it feels more exciting. And this is what gives the kicks that “giant” feel. Again, there is no hard and fast rule, but you’ll want to play with this a lot, as it’s really the heart of your track. The kick should come together and feel huge and saturated, filling up the frequency spectrum. Maybe layer some dry and some distorted kick samples. Layer multiple types of distortion on a kick sample to see how they interact.

If your kick is sounding promising, but a little weird, try using EQ at the end to fine-tune the feeling. If the kick feels dull and almost like a woody “knock” try cutting around 500 Hz. Finally, if the kick is sounding too grating, cut around 2,000-2,500 Hz, but if it doesn’t sound “in-your-face” enough try boosting here. Boost around 5,000-10,000 Hz for extra sizzle and excitement.

Check your tracks on as many sound systems as you can, especially your car. Compare your tracks to other hardstyle tracks you like. This is a great way to see how the feeling of your sounds is coming together.

At the end of the day, the most important secret to being a great EDM producer is to keep working. To know your software inside and out. You don’t have to know tons of music theory, but you do need to know how to stretch and bend and shape sound using all the ins and outs of your software. There’s no substitute for the time you spend watching videos, reading articles, and especially, fooling around.

I highly recommend to try and re-create some of your favorite tracks. See how close you can get. This is a fabulous way to learn new techniques. And when you run into something you just can’t get, then at least you have a specific question to ask now. It’s a lot easier to answer “how did this artist do this effect right here” instead of “how do I make EDM.” If you are struggling with the final polishing of your tracks, consider investing in a professional mixing and mastering service. These services can be more affordable than you’d expect, while also being a powerful tool to learn by example. Keep working, and feel the joy of the music!