If I may say so myself, I consider myself more qualified than most to write about MIDI. I’m a producer and songwriter, and I work in a lot of genres and styles these days. Indie, jazz, blues, rock, soundtracks… But music all goes back to MIDI for me. I developed my writing and arranging chops using a MIDI editor when I was about fourteen. I’d find .mid files of my favorite game soundtracks or skate-punk songs. Then, I’d open them up to examine and understand all the notes. I learned melody, harmony, the roles that different instruments played, all through the power of MIDI. 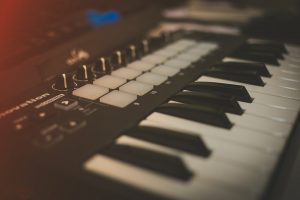 I’ll take a minute to untangle MIDI here, as it can be somewhat confusing. MIDI is a surprisingly old-school production technique that is still highly relevant, perhaps moreso than ever. MIDI is acronym for Musical Instrument Digital Interface. It’s basically a way to have separate devices in charge of physical music controllers (usually styled like piano keyboards) and actually creating sounds. Organs and synthesizers, for instance, include a keyboard integrated into the sound-generating machine. But a MIDI keyboard has no on-board sounds. You have to pair it with a sampler, or these days, pretty much always a computer.

The idea of “MIDI instruments” is related to this. Think about old Super Nintendo or N64 soundtracks. Or flip phone ringtones. When digital memory was at a (relative) premium, it was not space-efficient to dedicate megabytes of space to audio recordings. So it was popular for computers, phones, and game systems to have a bank of sampled sounds on-board. These soundbanks were called “General MIDI” or “GM” on computers. Songs were then stored as .mid files, which are tiny compared to an audio recording. Like, 1/1000th the size.

Of course, this has totally fallen by the wayside with modern devices. MIDI files are mostly used these days internally during the music production process. The archaic 5-pin plugs of the 80s have largely given way to USB. Now, it is popular to use a MIDI keyboard or piano roll to create MIDI files that then play software synthesizers or samplers. A modern producer might load a catchy synth sound, play a riff on a MIDI keyboard, and save the track as a hook, for instance.

I personally use a lot of MIDI these days for sampled drum machines, pianos, organs, wurlitzers, and other keyboards. MIDI is particularly well-suited for traditionally keyboard-based instruments. If you are playing into a great sampler or digital instrument, then the MIDI performance captures your performance’s dynamics and expression on a deep and organic level. The result is difficult to tell from the real thing. 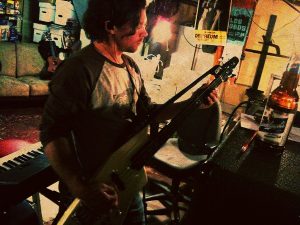 But this whole process gets more complicated when using MIDI for instruments that are played very differently from keyboard. For example, guitar. Of course, there’s always the (very niche) approach to make your MIDI instrument sound very unrealistic as a throwback to the 90s. By sheer coincidence, I have recently been obsessed with the hypnotic Bill Wurtz song “New Canaan.” The tune is written like a country or folk song, but the “acoustic guitar” is clearly a lofi sampled MIDI instrument played through a keyboard. It’s got a pleasant tone, reminiscent of a harpsichord more than anything. But nobody is going to think that someone is strumming away at a real acoustic guitar.

Fear not, New Canaan is not the end of the road. There are a handful of new, exciting approaches to combining MIDI and guitar, with much more natural results. Perhaps most exciting, you can now buy a MIDI controller that plays like a guitar, or even a special pickup that can be installed on any guitar to convert it into a MIDI instrument! Aside from this, you can also carefully select VST instruments and create realistic-sounding guitar parts on MIDI in other ways.

A guitar that behaves like a synthesizer. This has been a bit of a pipe-dream since the 1960s, about as long as electric guitars have been popular. Vox had a bizarre guitar-organ attempt in the mid 60s, and Casio and Roland made noble efforts in the 80s. But nothing caught on beyond the point of novelty. One of the biggest stumbling blocks has been the relative precision of the technology. Great guitar playing involves a lot of nuance in technique that translates to an expressive performance. It seems that the tech is finally catching up, and this pipe dream is becoming a reality!

I warn readers that we’re still in the wild west era of guitar MIDI controllers. The technical limitations are being overcome, but in fits and starts. Some users still complain about difficult tech support, poorly calibrated elements of design, and issues with latency or expression. Some reviews lament that the full promise of a MIDI guitar controller has not been met. But after watching demo videos of these instruments, I’m personally very impressed. They’re far from making guitars obsolete, of course. But a guitar VST played with a guitar MIDI controller sounds miles more natural than the Bill Wurtz tune, for instance.

And there are other advantages. Suppose you are a guitarist who wishes they had access to other stringed instruments, but only occasionally. With a guitar MIDI controller, you can very easily lay down a convincing banjo, mandolin, sitar, or more.

And beyond just strumming rhythm parts, these companies are aware that guitarists do a lot of micro-expressions. Guitar MIDI controllers are capable of detecting vibratos, slides, hammer-on/pull-offs, and more. With this level of input capability, the only question mark is, how realistic is your guitar VST? With the right virtual instrument, you’ll fool anyone.

If you want to go the Guitar MIDI controller route, I highly recommend doing some deeper diving into reviews and demo videos. Each instrument has its own list of strengths and weaknesses, pros and cons. The Jammy Guitar and Artiphon INSTRUMENT 1 look far more promising as serious studio tools though, while the Jamstik looks best-suited as a learning tool for guitar students.

Maybe you’re already fond of the way your guitar plays, and you don’t particularly want to invest in a new instrument to navigate. Roland now offers the incredible GK-3 “divided pickup.” This is actually a continuation of Roland’s attempts since the 80s to create a similar technology, but it’s never worked this well. Beware that this pickup does not output MIDI directly. It must be played into a compatible device such as the expensive but incredibly powerful GR-55, or the more affordable GP-10.

The GK-3 is installed near a guitar’s bridge, much like a traditional pickup. But it actually detects the guitar’s playing, and converts the audio information into MIDI notes. This pickup is different from playing with a MIDI guitar controller, because it doesn’t matter how you finger notes- all that matters is what you are actually playing. The result is really quite incredible, unbelievably natural and powerful. The guitar synths have a host of high-quality on-board instrument sounds and effects, so you can record audio directly from them, or use them to record MIDI into a DAW if you’d like to use your own sounds.

At a much lower price point, but with questionable credentials, is the Fishman Tripleplay. This is a very similar concept to the Roland GK-3, with the added benefit that it doesn’t require an expensive synth unit to interface with other devices. I watched some very promising demos of this product, see some enthusiastic reviews, and even noted that Sound on Sound (a source I trust) called it the “best in class” for guitar-to-MIDI pickups. But many reviews complain about issues- very difficult setup, poor tech support, and in some cases, an overall ineffectual product. I’d say the Tripleplay may just be a Roland-killer, if they can pull it together. As it is, the lower price point comes with a gamble regarding quality.

Other Approaches to MIDI Guitar

As you may have realized, my recommendations so far have all been great for translating realistic guitar playing to MIDI- if you are a guitarist! If you don’t know how to play guitar, then you’d have to learn how to play in order to use a guitar MIDI controller or pickup. That may defeat the purpose for some people?

If you only play keyboard (or if you don’t play any instrument at all) you can still work towards realistic MIDI guitar sounds.

Acoustic guitar is typically used for strummed patterns in music. If you play a MIDI keyboard with an acoustic guitar patch, it’s not going to sound very realistic, no matter how good your VST is. Keyboard and guitar rhythms just tend to sound different, due to the nature of the instruments.

I’ve personally used Guitar Pro for years, since the 4th generation was the newest thing around (the company is currently on version 7.5). Guitar Pro is sort of like Finale or Sibelius, but oriented towards guitar players. It’s great for tabbing out guitar parts, and has expansive technique libraries like strums and bends. In my experience, Guitar Pro’s instrument libraries are only marginally better than general MIDI (though I am a generation and a half behind at this point.) But Guitar Pro can be used to tab out an acoustic guitar strummed rhythm, including realistically strummed timing (the notes sweep up and down as they would with pick strikes.) If you export these files as .mid files and import them with your DAW and VST of choice, you will be on your way to realistic acoustic guitar MIDI playing.

Electric guitar tends to be more versatile than acoustic, and is used in many different types of rhythm and lead roles. Amps and pedals lead to a huge diversity in tone.

Try this technique: use MIDI software such as Guitar Pro to tab out electric guitar playing, including any bends and slides and hammers that your heart desires. Import this .mid file into a clean guitar VST, and run it through Amplitube 4 amp simulators. This is incredible powerful software that I personally use every day when I’m writing and producing music. With a huge selection of very realistic amp sims, pedals, virtual recording spaces and mic setups, and more, your MIDI guitar sounds will absolutely wail!

What are you going to do- record a guitar through a microphone like some kind of cave person? Wake up, it’s the 21st century! Now you have so many ways to combine the power of MIDI and the passion of guitar. Between guitar-shaped MIDI controllers, magic guitar-to-MIDI pickups, and some tricky techniques to arrange virtual guitar parts without actually touching an instrument. You can fool veteran guitarists with your MIDI creations- if you don’t mind putting the work in. Well, playing guitar the old-fashioned way will always be the simplest way to create elegantly realistic guitar. But the marriage of MIDI and guitar opens up dizzying possibilities.

Don’t be afraid to reach out to professional services if you’re having trouble with the mixing and mastering side of production! They can be more affordable than you would expect, and really bridge the gap to a professional-sounding final result. Keep working, and always keep the joy of the music alive!