The French horn is one of those instruments that seems to exist in its own world. Even though it belongs to the brass instrument family, it has a very unique and specific character. The instrument itself is unique, after all. The French horn is the only brass instrument whose bell is intentionally aimed away from the audience. Not to mention that the player places their right hand in the bell while playing. Perhaps this is why the horn’s warm, rich tone is so unique.

And the French horn has a very individual place in music. Unlike other brass and woodwind instruments like the trumpet, saxophone, and trombone, the French horn has never transitioned to modern music in a big way. Of course there are exceptions, but when the French horn does show up in recordings by Beatles, Rolling Stones, or the Beach Boys it seems to say “look, a French horn! How about that?”

I won’t comment on whether or not this is true- it seems highly subjective to me- but I once read that the oboe and French horn are the two most difficult instruments to play. Funny, because neither attracts the flashy virtuosos who become lead trumpet, violin, or hell, metal guitar shredders. They are both quiet, modest, mid-range instruments. I’d wager the average person couldn’t tell you much about them. Actually I was a French horn player in middle and high school band. But I never practiced enough, and I couldn’t tell you if the instrument was difficult or if I was.

Anyway, if you are reading this article, then you’re trying to mic up a French horn, either because you play yourself or you are helping a player out. I think it’s always worthwhile to consider what an instrument represents, its character, its context. The horn certainly has its own individual character, meaning it’s a unique challenge to mic it! But with the right approach, you can really help this fussy and gorgeous instrument shine. That said, if you don’t pay this challenge the respect it deserves, you may end up with an unpleasant mess of a sound.

Recording brass instruments in the studio is always a fun challenge. After all, we usually work with the attitude of close-miking, whether it’s vocals, guitar cabs or drum heads. That gives us isolated sounds that are easy to manipulate later, and avoids interference from tricky rooms. Brass instruments in general shine when they have space to breathe, though. I just read a note from one recording enthusiast, that the final “node” of a brass instrument’s sound happens about a foot outside of the instrument. As a result, if you mic too close you will lose the true character.

And the French horn goes a step beyond this. Because in a natural setting, you don’t hear the horn’s direct sound- you hear the sound reflected off surfaces behind the player. So the one piece of advice that bears repeating with the French horn. Do not simply aim a mic at the bell and be done with it! Your tone will probably be nasal, muffled, and totally unrelatable.

Opinions about recording French horn quickly split past this point. But a few common pieces of wisdom emerge. First, record in a medium or large room if you are able to. After all, when you record a French horn, you are really recording the room. Second, while this is not unanimous, most people recommend setting your mic up in front of the player, not behind. Third, if you are in a large enough room that the player is too far from a wall, try placing a hard, reflective surface about 3-4 feet behind the player. A sheet of plywood does the trick.

Beyond these general guidelines, trial and error is a worthwhile time investment. After all, every room and player will be different. Try starting with the mic about 6 feet in front of the player and 5 feet off the ground, aimed generally in the player’s direction. Move further for more room sound, or closer for a brighter and more intimate tone.

Most recommendations for French horn mics tend towards large diaphragm condenser, or ribbon mics. Condenser mics have a very bright and airy tone in general- they are the default choice for recording vocals in the studio, for example. While brass instruments can sound overly bright or harsh on condensers, this character can be a great match for the relatively mellow tone of the French horn.

Typically, cardioid condenser mics are used for miking individual instruments in the studio. But as I said, with French horn you are recording the room as much as the instrument, so an omnidirection or figure-8 pattern can actually be a better choice.

If your budget is very large, the Neumann U87 is hard to beat. This classic microphone is basically known as “the” studio vocal mic. The U87 has a warm tone that sounds instantly familiar as a result of this stature. But how much money do you have left over from buying a pricey French horn anyway?

I love recommending the Avantone CV-12 whenever I get a chance, and this is a great one. This mic is famous for sounding as good as mics that cost 2-3x as much. Like the U87, it’s a tube mic with a relatively warm and flattering tone. It’s versatile as well; when I had one, I put it to use on vocals, drum overheads, acoustic guitar, hand percussion, and more. And the CV-12 has selectable pickup patterns with a whole spectrum of choices including cardioid, figure-8, omni, and points in between these extremes. Great for experimenting to find the right fit when recording French horn!

If your budget is a little lower yet, the Audio Technica AT2020 is a popular choice among wind players. This large-diaphragm condenser will not sound quite as high-fidelity as my other recommendations. But it will capture a crisp and detailed sound that should impress most. The AT2020 is known as one of the best-sounding mics for wind players at its price point.

Ribbon mics are like a hidden gem of the music production world. Over and over, I have seen producers and engineers get excited because they have finally discovered ribbons. These mics are consistently described with two words: “natural” and “dark.” One producer wrote that ribbon mics “hear like your ears.” I don’t know enough physics to corroborate this, but it feels very true in my experience with them. 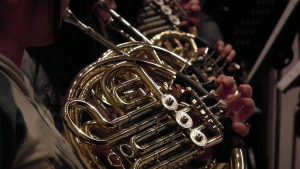 You must keep a few things in mind when working with ribbon mics. They have very low output, and often a mic activator such as the Cloudlifter CL-1 is needed to boost the gain. Ribbon mics do tend to be a fairly serious investment. They are figure-8 pickup pattern by design (although that is likely to be an attribute with the French horn.) And their tone can be overly dark, especially on relatively mellow instruments like the horn. That said, recordings made with ribbon mics are highly responsive to EQ. Boost the mids and highs, and you will be shocked at how rich and natural of a sound you have captured! As such, ribbons are an enduringly popular choice for brass and woodwind players.

My if-you-have-the-cash recommendation is the Royer 121. Similarly to the U87, this mic enjoys a reputation as “the” ribbon mic. It’s another flattering and versatile mic, realistically a good choice in just about any setting that calls for a ribbon.

The popular more-budget-friendly recommendation is the Cascade Fat Head. This mic is like the CV-12 or AT2020 I mentioned above, in that users are consistently impressed with its level of bang-for-the-buck.

I personally own an Avantone CR-14, another of the most inexpensive ribbon mics on the market. The CR-14 has a slightly lofi character, but it’s the pleasing and charming lofi, not the tinny and piercing lofi of cheap condenser mics. Honestly, I usually use this mic as a secondary mic, while a more hifi mic does the real legwork.

The rich, mellow French horn tone seems to surround you from all sides as it reverberates in a room. You can capture this immersive depth by recording the horn with a stereo pair of mics. If you plan to record in a typical XY or spaced-pair configuration, get a matched pair of mics.

But my personal favorite way to record in stereo is with the mind-bending mid-side stereo recording method. In this unique stereo mic configuration, a cardioid mic acts as the “mid” channel, while a figure-8 mic (like a ribbon mic) acts as the “side” channel. You can mix the two channels relative to each other to vary the “width” of the recording. When recording French horn, this will allow you to get control whether your horn sounds more intimate, or spacious and powerful. As if this technique needed more selling points, it’s the only stereo mic technique that ensures perfect mono compatibility by design. Try it out! The AT2020 and Avantone CR-14 would make for an excellent starting point here.

I won’t lie. As you may have guessed from the French horn’s attributes, successfully miking it in live settings is an unenviable task. Reading between the lines, the advice often boils down to “do your best.” After all, it’s much harder to capture the richness of the horn’s tone reverberating in a room, when that room is also full of other instruments! 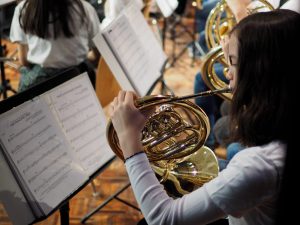 If you are miking a French horn section in a classical or orchestral setting, use a cardioid large condenser mic (such as the Neumann U87 or Avantone CV-12 mentioned before.) Mount the mic between the first and second hornists’ stands, about 5-6 ft above the ground.

In more contemporary ensembles, miking a live horn depends greatly on the situation. A common solution is to use a plexiglass panel (such as a drum shield) behind the horn player. This maximizes sound reflection towards a mic, as well as the audience.

Then place a mic in front of the player, pointed towards the bell but a greater distance in front than typical when miking live brass. I saw recommendations for the Shure KSM44, Oktava MC012, and Shure Beta 98 h/c (if you want to try a clip-on after all.) Depending on your mic and on the rest of the stage setup, at this point you will need to play with positioning and EQ. You may need to use relatively severe EQ to imitate a more natural horn tone. If you still have difficulty, you can move the mic behind the player and EQ to taste as well. Keep in mind that you should listen carefully to the horn player’s notes about the tone (or if you are the horn player, don’t be afraid to speak up!) The horn player probably knows far better than the engineer how the horn should sound.

Successfully miking a French horn is no easy task. Whether in a live or studio setting, I’d place this task in the “beast mode” category of music production. But with the right equipment, setup, and dedication to trial-and-error, you can bring this unique instrument to life. If you are having a hard time nailing the French horn tone in the mix, don’t be afraid to reach out to professional mixing and mastering services which can be much more affordable than you might expect, and a great resource! Keep working, and feel the joy of the music!