There are two types of people: People who love and appreciate the unique and versatile percussion instrument that is the cajón, and people who don’t yet know what a cajón is. Either way, any producer who is aware of this humble powerhouse, will sooner or later find themselves asking themselves how to mic a cajón for recording.

First, the most basic of introductions. A cajón is a box that you play. It is a small rectangular wooden percussion instrument. Players typically sit on the cajón, and beat and slap the front surface. The cajón has a trick- there is a snare mounted to the inside of the front playing surface. This means that a player can alternate beating around the edges for a bassy thump, and slapping the middle for a snare-like snap. So the cajon can easily imitate patterns from a full-sized drum set in a variety of genres, yet it is a fraction of the price and infinitely more portable. It’s also one of the simplest instruments to build if you’re somewhat handy.

Cajóns originate from African slaves in Peru and other South American Spanish colonies in the 16th century. The word cajón translates to “crate” or “drawer,” and while there are competing theories about the instrument’s genesis, many believe that the original cajóns were simply repurposed shipping crates. This is comparable to the sort of industrial-cultural ingenuity that developed the steel drum out of 55-gallon oil drums in the Carribean. 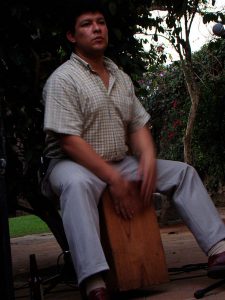 Today, the cajón is popular in Latin America, Spain, and the Phillipines. Many American musicians are discovering its potential too, and it is often used to accompany acoustic musicians. A singer who plays acoustic guitar and a cajón player make an excellent pairing. The sound together is full, fun, light, and driving.

Many players experiment with cajón playing styles too, to further explore its versatility. I personally have played with a drummer with an ingenious setup. He used only a snare drum, hihat, and cajón. The drummer sat on top of the cajón and used a rear-facing kick pedal to play it like a kick drum. He played the snare and hihat with sticks. It verged on a full drum set sound, yet it was far more portable and easy to set up.

Now that I’ve amplified your enthusiasm for cajóns, here’s how to mic one for recording. No matter whether you are playing live with an ensemble, or tracking solo; in a studio or bedroom; whether you have one mic or several. 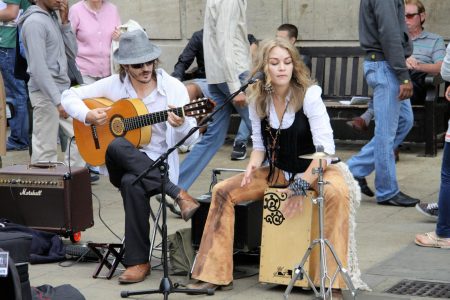 If you are recording cajón solo, this is just one option available to you, and it can also be combined with other methods. If you are playing on stage or with a group, it is essentially your only option, as anything else will pick up too much bleed.

The consensus is that the ideal close-miking configuration for cajón involves two mics. One pointed at the front to capture the “slap” and the other pointed at the rear to record the bassy “thump.” Cajóns have a sound hole in the back, and the rear mic should probably be pointed at that hole, a few inches away, but at an angle to avoid a boxy sound. Many producers like to use a small-diaphragm dynamic mic like a Shure SM57 for the front, and a larger-diaphragm mic like the Electro-Voice RE20, Shure Beta 52A, or Sennheiser MD-421 for the rear. One producer advised to treat the front like miking a snare, and the back like miking a kick drum.

As always, experiment with mic proximity to get the best sound. After all, as a producer, your priority should always be good performance, then good recording technique- and you’ll find that you have to do less and less to process afterwards.

Once you have your two tracks, make sure to reverse the polarity of one. You should always do this when the two mics are pointing towards each other. Otherwise you run the risk of strange phase issues that can diminish the power and warp the tone of your recording.

With this mic setup, you have the option to simply combine the two tracks for a natural sound, and process them together to taste, or to process them very differently. It all depends on the needs of the song. I would personally go for a more natural sound if the cajón is being used prominently in a small acoustic ensemble, to emphasize a warm and “woody” presence. But hey, it’s music, and at the end of the day if you make something compelling then you might find yourself coloring outside the lines!

There are even dedicated cajón mic systems, such as the Amplified Timber mount which integrates an Audix ADX60 mic. This could be a worthwhile investment for cajón players, or producers who find many occasions to record them for whatever reason.

If you only have one dynamic mic, I would try miking either the front or back, as described above. It’s a compromise, but it depends on the playing style for the particular song. When in doubt, I would go for the front over the back.

This setup can be a great option to capture a really natural, full sound. It’s not likely to work well in live settings or when playing with other musicians, only when tracking individually. And don’t forget, as with all room mic situations- you are micing the instrument AND the room. This means your recording will only sound as good as the instrument and as good as the room.

A room-mic recording has limitations. There are reasons that most studio recording involves close-miking. Room mics mean you are tied to the room’s natural reverb. Whereas, if you close-mic, you will get a dry sound, and you can add your own reverb to taste. Room mic recordings tend not to be as punchy- the proximity effect means the bass will not be as powerful from far away. And if you want to compress heavily, your recording may sound strange as the room reverb pumps in and out, with an almost side-chained effect. Room-miking the cajón is best used when a natural, minimally-processed sound is desired.

Sound Good in the Room 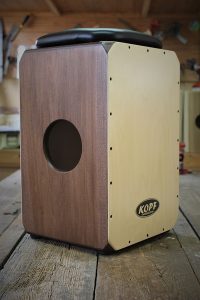 These potential “limitations” also open a channel of creativity. Try moving the cajón around the room to change the sound. Playing near a wall or corner will boost the bass presence of the instrument, using the “boundary effect.” (ever put your smart phone in an empty glass to boost the bass? The effect can be amazingly strong.) You can also try playing on a hard floor for a brighter sound, or on a rug or carpet for a more muted tone.

When room-miking, use a condenser mic a few feet from the player. This will capture the instrument as well as its reflections and reverberations around the room. Placing the mic closer to the instrument makes it more present, while farther away will capture more of the room’s character.

You should be aware of a room’s character, because not every room “sounds good.” You probably know this on a subconscious level already. Some very small rooms like bathrooms can provide an intimate reverb (why do you think people like to sing in the shower?) Some larger rooms or rooms with high ceilings sound powerful. Depending on room shape, your room might just sound boxy and lifeless. Only subjective experience will serve you here. And remember there are techniques to reduce unwanted echoes and reflections in your room.

You can use a stereo mic setup too, such as a matched pair of condenser mics. I personally am a mid-side recording fanatic. This is a fabulous and underrated way to record in stereo, and really deserves its own article. I’ll provide a brief overview here though.

Mid-side recording uses two condenser mics to record stereo, but they probably will not be a matched pair. Stereo recording has lots of difficult technical difficulties to overcome- phase issues are common, especially when the final track is played on mono and barely-stereo systems like phone or laptop speakers. Mid-side recording doesn’t result in a left and right channel- it results in a mid channel and side channel. Conceptually it’s a bit abstract, but you can play with the balance of mid and side channels’ volumes to make the recording sound “wider” or “narrower.” Furthermore, the track will convert to mono perfectly with no phase issues.

How to Record Mid-Side Stereo

Duplicate the “side” track, hard-pan the two side tracks left and right, and reverse the phase of one side track. When combined with the mid track, you have a gorgeous stereo recording. I also love this technique because of the immediacy of mic placement. While the player is playing, walk around the room and find sweet-sounding spots. Place the mics where your head was, and you will record what you heard!

The wonderful thing about room mics is that they can easily be used in tandem with close-miking. For example, try compressing the room mic track and mixing it behind the close mics. That will give you a lovely layer of reverb in your sound, while maintaining the punchiness of your close-mic tracks. And if balancing and processing all these tracks is starting to give you a headache, don’t be afraid to reach out to professional mixing and mastering services– they can be more affordable than you’d expect, and a great resource to sharpen your own techniques as well!

And there you have it, a comprehensive guide to miking the cajón for recording. Never stop experimenting, work hard, and feel the joy of the music!