That’s right- we are officially at the point in history where “How to Record Bass Guitar on a Phone” is a coherent question. You wouldn’t have to go very far back in time for this question to sound insane. But this is a testament to how far and how quickly technology has come. Now, musicians and the musically-curious have more and more power and freedom of expression. And now, bassists can make great-sounding recordings with their phones, and with surprisingly minimal equipment. 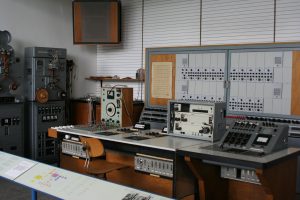 The average person can conjure a typical recording studio in their mind. A specialized building with expensive equipment. Tape machines, vast mixing boards, knobs and dials and lights and meters. The digital revolution has completely turned this industry on its head, and this image is more and more outdated. A computer has the capability to take the place of most of the equipment. Great headphones provide a workable listening environment in any room. More and more, mobile devices like phones and tablets have the capability to take the place of computers.

Personally speaking, I have a friend who produces great music, with a mixture of electronic and live playing. A small record label puts out his material. His music is produced entirely with an iPad, and he doesn’t use a computer at any point!

And the best part is that every part of audio recording, mixing, and production is easier to learn and more accessible than ever! We are experiencing a truly humanistic revolution, thanks to technology. An iPad or iPhone can now record any instrument or even vocals. The software available for mobile devices has not caught up with computer-based DAWs, at time of writing. But I predict it’s not far behind. And already, what’s available for mobile platforms is more than enough to make shockingly great music. 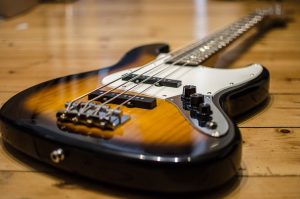 This article is for bassists who want to use their phones to record bass though. You need to buy some specialized gear, but it’s surprisingly affordable. I also want to take a moment to warn readers that the digital revolution has massively simplified the whole process of recording music- but there will be a learning curve and some technical fiddling no matter what. Furthermore, with more and more products aimed at beginner producers and non-producers, you are guaranteed to see a lot of reviews complaining about difficulty getting things set up. This is an inherent attribute of producing music- there are so many ways to do it, that it can only be so easy. There will always be a learning curve, so persist, and your perseverance will be rewarded. Read on for a few approaches.

As many bassists know, Paul McCartney and the Beatles production crew were very influential establishing DI (direct-in) bass recording. For those unaware, this refers to plugging a bass directly into a console or recording device, bypassing an amplifier entirely.

As tech progressed, the definition of DI recording shifted. Amplifiers with headphone jacks can be used to record direct-in from the headphone jack, while still using an amp to shape tone. With the digital revolution came amp simulators, meaning a computer or yes, even phone or tablet, can now take the place of a guitar amp. Amp simulators are very powerful. They are a branch of an entire industry dedicated to crafting digital imitations of all kinds of iconic music processing gear.

If you want to record bass DI into your phone or tablet, you have a few options based on your gear choice. This producer can’t help but recommend the IK Multimedia iRig HD2. This recommendation is largely based on the bundled software. IK Multimedia also makes Amplitube, a very powerful amp simulation suite that should realistically fulfill almost any musician’s basic needs. As a producer and songwriter, I use Amplitube’s Fender pack for all my electric guitar recording, and their emulation of the iconic B-15 “flip top” amp for bass recording.

The iRig comes in two forms, the “Analog” and “Digital.” I’ve heard a few recommendations that the “Digital” is far worth the extra cost. The “analog” model has an irritatingly misleading name (IK knows full well that people associate this word with classic hi-fidelity.) The analog model simply outputs the audio signal to a 3.5mm headphone jack, with the intention of recording into a phone’s headphone jack. More and more, phones are abandoning their headphone jack. And without getting too technical, the headphone jack has more limited sound quality capabilities than the USB or Lightning audio output that the iRig’s digital model employs.

So how does it all work? The basic concept is quite simple. Use an instrument cable to connect your bass to the iRig. The iRig connects via lightning cable to your iPhone (you will probably need a third-party cable to connect to a different phone.) Run the Amplitube software on your phone. This software comes with a set of default proprietary amps, or you can buy dozens of amps based on real models. It has a multi-track recorder function, which you can use to record bass and export the tracks.

If you are trying to record a bass part for a song (suppose you are a session musician or you want to record tracks at home for your band) you can import music and overdub using this function. You can export the bass track (individual instrument tracks are called “stems” in this context) and send them to a friend or producer. If the tracks are lined up when you export, then it will be easy for someone else to line them up when importing. Export in .wav format, it’s the industry standard, the most universal and highest-quality.

The iRig is not your only option to record bass on your phone. It may have its drawbacks- it seems the designers had Apple phones in mind. I saw reviews from owners of other phones, who complained of potential compatibility issues. Some said that the iRig feels cheaply constructed. A handful of competing phone-compatible audio interfaces are available, that will also allow you to record bass into your phone.

Roland is an established, well-respected company, and its GO:MIXER looks like a compelling option. With two inputs, you could record two instruments simultaneously, or an instrument and vocals (although oddly, the mic input is a ¼” instrument cable jack.) At a somewhat higher price point, check out the Focusrite iTrack Solo and the Shure MVi. Reviewers speak positively of both. Focusrite manufactures probably the most popular line of introductory audio interfaces, the Scarlett series. Their products are well-liked and priced well Also, their popularity means that if you run into technical issues, you will have an easier time finding forum posts discussing solutions. Shure manufactures some of the world’s most iconic and popular mics, like the SM57, SM58, and SM7b. The MVi only has one input, but is physically well-constructed.

Jumping up in price point, the iZotope Spire Studio looks fabulous. It’s wireless, has two ¼” or XLR jacks, and comes with a software suite for recording. iZotope is one of the most well-respected companies in the audio production field. Their software is industry-standard. This interface was designed with musicians in mind, not producers. Simplicity and usability are design priorities. A musician with a bigger budget, and less audio production technical background, could do well with the Spire Studio.

DAW Options for Phones and Tablets 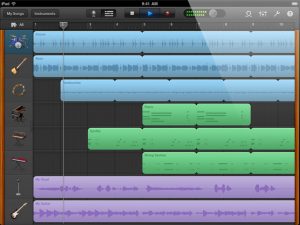 Using a different brand of audio interface may or may not be compatible with the Amplitube software. You still have options, but it may get complex. Some audio interfaces come with proprietary recording apps. You also have other great options for a DAW (Digital Audio Workstation) on your phone. Apple owners get GarageBand free- this app has an excellent reputation, and is amazingly powerful considering it is bundled software. For other paid options, check out mobile versions of popular computer-based DAWs such as FL Studio and Steinberg Cubasis. Garage Band and Cubasis offer VST or AU support, so you could conceivably run Amplitube or a simpler bass amp simulator.

You could also play bass through an amp, and run a cable from your amp’s headphone jack to your interface, in order to use the amp’s tone. Finally, you can always do away with amps entirely and just use your bass’s unamplified tone. I have personally heard this done to sound great in certain contexts! As with anything in music production, there is no right answer. Remember the mantra “if it sounds good, it is good.”

Another advantage of pretty much all forms of DI recording (unless you are running through a bass amp) is that you will have your clean bass signal recorded. If you turn off the amp simulator, you will hear that unaltered “direct” bass tone. This gives you some flexibility. You can change your bass amp settings even after it’s recorded, you can “re-amp” it by sending the signal out to an amp of your choice. If you are sharing the stem, your producer or friend can play with their own amp settings.

Recording with an Amp

All of my previous advice was based on DI recording- different ways to record bass silently and directly into your phone. You may prefer this for many reasons- not annoying roommates of neighbors, the added flexibility for experimentation mentioned above. But there is something about the simplicity and immediacy of using a microphone to record a bass amp. And music production is about more than just the details and logistics- it’s about the feeling. Jamming with a real amp will feel different, and might inspire you to make music in a different way.

The previously-mentioned iRig is not designed for this, but many other interfaces I mentioned have XLR or mic inputs. IK Multimedia also sells the iRig Pre and iRig Pre HD, which are essentially a variation on the iRig designed for mic input instead of instrument cable input.

Recording a bass amp with a mic is fairly simple, but may take some experimentation. A popular method involves using a dynamic mic, placed near the speaker cone. Experiment with different positions about 5-18” away from the amp to find the position you like best. Placing the mic too far from the amp could be problematic- you will start to capture the reverb of your room (“room sound”) as well as the bass. Reverb in low-end frequency ranges like bass tends to be more foe than friend. Keeping the mic close to the amp will help to tame this issue.

There are many variations on this technique. Try positioning a large-diaphragm condenser a little farther back from your dynamic mic, and record both simultaneously. You can use the dynamic for the low-end bass frequencies, high-pass the condenser track, and use it to introduce some subtle “room tone” without any fear of low-frequency reverb crowding your track.

Many producers record bass DI and mic’d simultaneously. Try blending the two tracks to experiment with tone. A mixer or splitter is necessary to send the bass signal to two sources at once.

So there you have it. Recording serious audio tracks with phones is a new phenomenon, but already you have many options at your disposal. Don’t be afraid to experiment, and don’t give up if you run into technical headaches. Once you figure out a setup that works, your persistence will pay off. Don’t be afraid to reach out to professionals for help producing music, it can be more affordable than you expect. Keep working hard, and feel the joy of the music!