When it comes to microphone placement for voiceovers, some very important factors to consider are the following: proximity, polar pattern, and dynamics.

Just want a quick answer on where to place the mic for voiceovers?

For most mics, you’ll want to place the mic around 6 to 8 inches away from your mouth in order to really capture the sound of your voice. Tilt the mic roughly 10° to 15° degrees away from your breath to minimize plosive pops that can come from “b” or “p” sounds.

That’s it, then you’re ready to go in most cases! But of course, there’s more to it than that so if you want to take a closer look at everything you need to consider stay with us.

Polar Pattern (po·lar /ˈpōlər/ pat·tern /ˈpadərn/)
1. The sensitivity to sound relative to the direction or angle from which the sound arrives. The most common types are omnidirectional, cardioid and dupercardioid.

Dynamics (dy·nam·ics /dīˈnamiks/)
1. The varying levels of volume of sound in different parts of a musical performance

Polar Patterns and How They Impact Mic Placement

What polar pattern does your microphone have? The following is a diagram brought to us by Shure, which will really help in our knowledge of what to expect with different microphone polar patterns. 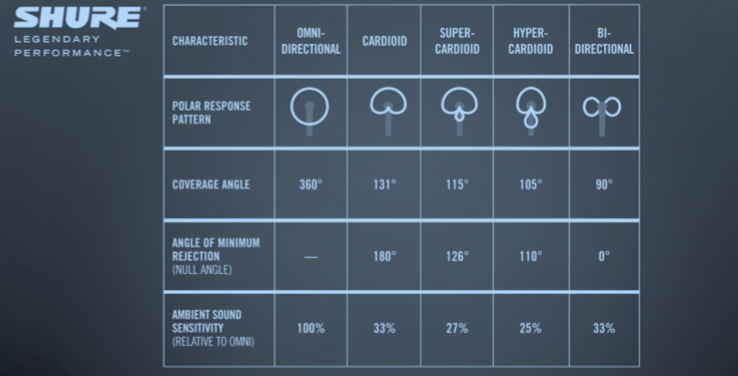 There are many applications in which these different mics can be used. Let’s say we had two voiceover artists that must be recorded at the same time and only one mic could be used. What mic would you choose? A bi-directional mic would be a great choice! We could also use an omni-directional but will get lots of ambient bleed from both the voices during each person’s take.

Let’s say we’re only recording one participant doing voiceovers. What mic would we use then? Exactly all of them would be a great choice aside from the bi-directional. Cardioid, super-cardioid, and hyper-cardioid are the best decisions.

Omni might be better-suited as an overhead mic on a drum kit or on a stringed instrument.

There is a place in proximity where your voice will sound most natural. The best place for your mic or mouth to be positioned is known as the sweet spot where your mic will reproduce this natural sound. All mics have a sweet spot, which is generally 6 to 8 inches from the diaphragm or ribbon but some mics, like those used by fitness pros or yoga instructors, may require you to move them a bit closer.

A suggested practice to find a good place to have your mouth relative to the mic is to use your hand as an indicator. Here’s how: Ball your hand into a fist, then lift your thumb and pinky, keeping the other fingers closed, and stretch them as far as you can.

Then, position your hand with your thumb and pinky extended in between your mouth and the mic. This will be a good position in which to start.

One thing to heavily consider when recording voiceovers is something we call plosives.

Plosives are created when strong gusts of breath travel from your mouth and aggressively interact with the diaphragm or ribbon of the mic. Clipping commonly occurs when the plosives hit the mic. Plosives are often created when words beginning with a “P” or “B” are used. There are many instances where plosives can occur, and P’s and B’s are just an example. Some genres, like beatboxing, are constantly fighting plosives but it’s generally an issue for every vocalist.

When you are experiencing plosives, the best thing to do is tilt the microphone diaphragm away from direct breath from the mouth. We’re not talking about 90° degree angles here, we’re talking about minimal tilts, like 10° to 15° degrees. Just enough of a tilt for your breath to pass the mic without affecting its diaphragm. Another tool to consider with plosives is a pop filter or wind sock.

The best practice is to place the mic right above the singer’s lips, roughly 8 inches away and tilted down toward the singer’s bottom teeth when singing. The singer should sing straight ahead and not up towards the mic. This keeps the mic just above the flow of air and actually captures a very nice quality sound.

Let’s look at two possible microphone setups for voiceovers and how they differ.

Again, let’s talk about proximity. If you’re doing voiceovers for a very intimate, soft-spoken conversation, you’ll most likely want to be close to the mic, about 6 to 8 inches from the ribbon or diaphragm. When closer to the mic, the low-end response of the mic is much better. This closer capture can create a bassier, breathier, heavier whisper-type sound, but this can also become a problem. This can create a genuine and authentic feel, but again can create problems.

Although you can get the bassier, breathier sound with proximity to the mic, it is a bad practice. This effect of a “bassier” sound is called proximity effect and actually begins around 12 inches away depending on the microphone. The closer you get, the higher the ratio of sensitivity becomes.

This bassier effect is actually a sound you do not want because it can create muddy recordings. Bassiness can easily be added from EQ and compression and maintain intelligibility, but a low frequency muddied vocal at the recording stage cannot be un-mudded and maintain intelligibility. Therefore, 6 to 8 inches is the preferred distance because the ratio of proximity effect is not enough to have an audible effect, but not because it has a heavy effect.

Anything closer than 6 inches would give you that booming sound voiceovers have, but again, professional voiceovers and podcasts don’t get that sound from being close to the mic, they mainly get it through compression and proper EQ. However, in instances like local radio or podcasts, bad micing is a common thing, considering most of them do it in their bedroom or small local studios.

Either way, that is not a desired or professional sound. I would not suggest trying to record a bassy sound on purpose because that is not natural. The bassier sound should be achieved by EQ and compression.

If you’re in an intense conversation, yelling or screaming in a controlled mic booth, you could be as far as 24 inches from the mic. Obviously, in this instance, if someone were yelling 6 to 8 inches from the mic, your signal would most likely be clipping. In a scenario where the voice is yelling, tilt your face away from the mic and position the mouth back further.

Practice your voiceovers. Try an intimate conversation. Stand 6, 12, or even 18 inches in proximity to the mic and see the different outcomes.

Try a more intense conversation at 12, 18, and 24 inches in proximity to the mic.

Create some soft plosives (don’t ruin your mic), and then tilt minimally (10° to 15°) until they are no longer there simulating the same sound. The more you practice, the more you’ll become familiar with what to expect; proximity and dynamics will become second nature. Again, remember the best practice is to place the mic right above the singer’s lips, roughly 8 inches away and tilted down toward the singer’s bottom teeth when singing. The singer should sing straight ahead and not up towards the mic. This keeps the mic just above the flow of air and actually captures a very nice quality sound.