I can’t help but start by referencing one of my favorite nerd pickup lines of all time. In Frasier, the geeky trekkie Noel purrs to his coworker Roz, “set phasers to stunning!” Alright, it’s a different kind of phaser- or is it? The two phasers have some strange overlap.

In music and audio production, a phaser is a primitive electronic effect that warps a sound with some multi-banded phase shifting that creates artificial peaks and troughs in the frequency spectrum. And here’s the vintage sci-fi connection: The result is a sound with a spacey, electronically-distorted quality. It’s been used to great effect to create a robot voice, as with C-3PO. 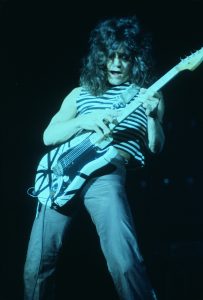 Of course, it didn’t take long for musicians to get their hands on it. After all, 20th century music could essentially by summarized this way: Someone invents something that does something to sound, and then somebody else invents a genre of music around it. Early phasers came on the scene in the late 60s, and in 1974 MXR was essentially launched on the strength of the iconic Phase 90 pedal.

The Phase 90 was soon everywhere. Eddie Van Halen crafted his guitar tone around it, but it was used to equally great effect in subtle contexts, such as the electric piano in Just The Way You Are. Phasers and the distinct-but-related flanger effect came to define the sounds of the 70s and 80s, in much the same way spring reverb and tube amps had defined the 60s.

The Nirvana happened in the early 90s, and suddenly all effects were out except for overdrive and distortion. I’m exaggerating of course, but by that point the phased sounds were starting to get played out, and people wanted something new. I’m happy to report that one of the greatest contributions of the 2010s in music is the reintroduction of funky, warped sounds to throwback pop and dance hits. From mainstream acts like Bruno Mars to more artistically adventurous groups like Unknown Mortal Orchestra, it’s cool to warp your sound again!

Pedals like phasers and flangers are more often associated with rhythm instruments- electric guitar, electric piano and keys. Even vocals! But you can dive deep into some funky basslines that drive grooves forward, by applying effects like phaser to the bass tone. Phaser creates a bass tone that could be compared to chorus, but funkier. Oh, check out Dancing in the Moonlight by Thin Lizzy! No relation to that excellent King Harvest one-hit-wonder, but that bassline grooves so hard that I don’t mind.

Police were quite flamboyant with their bass usage already, considering Sting was one of those relatively rare bassist/lead singers. While the bass phaser didn’t make it to many studio recordings, Sting can often be found rocking a phaser live performances. Police were (typically) a 3-piece band, so there’s lots of room in the sound to give the bass added depth and expressive tone.

So whether your genre is some funk, disco or dance. Or something more subtle like reggae or jazz fusion. A phaser pedal could really ramp up your bass tone. Check out some of my recommendations.

The MXR Phase 90 is one of those cash cows that the company has the good sense not to slaughter. A surprisingly common problem- Electro-Harmonix had to resuscitate the Mu-Tron III, and the supply-demand ratio of the Klon Centaur is so wacky that originals of this discontinued pedal guarantee four-digit prices. MXR has been pumping out Phase 90s since the early 70s, and have only expanded their range of variations on this iconic pedal.

To this day, the Phase 90 is one of the top recommendations for the bass, be that as it may that it was designed for guitars. First and foremost, its tone is not a classic for nothing. It’s a great-sounding pedal that has only become more desirable as its tone infiltrated the zeitgeist. This pedal is so elegantly simple that it can’t be argued with. The only control is a knob to set the rate. And finally, in the words of one forum post, there is “absolutely no loss of low end.” This can be a concern when using guitar pedals on bass, as guitarists are more likely to tolerate a diminished fundamental frequency in the name of tone. The bass has a job to do though, so bassists must always ask “will this cut my bass frequencies?”

The Phase 90 is an analog pedal with iconic tone. But MXR has gone further and introduced many variations, which are worth your consideration. The Phase 100 introduces, gasp, a second knob, allowing a few phase type presets. On bass, the Phase 100 is good for a deeper and more dramatic phase effect, while the 90 is better for a basic classic rock tone. Of course there are more. The Phase 95 allows switching between 45 and 90 phase shift modes, and the Phase 99 has dual outputs, each with a dedicated rate. By varying the two and sending the output stereo, you could dive into some truly deep and spacy environments!

Electro-Harmonix and MXR are stiff competition when it comes to pedal pedigree. EHX has some of its own smashes, particularly the Big Muff Pi fuzz pedal from the late 60s and the world’s first flanger stomp. And the EHX Small Stone is a worthy competitor to the Phase 90. The original Small Stone predates the Phase 90, introduced in 1970. Beside the rate control, the color switch activates an extra layer of texture to the phaser. And if you want more drama, check out the modded Bad Stone with more warp features. Experiment with the Manual Shift and Feedback knobs to really send your tone to the stars.

So far my recommendations have been moderately-priced and fairly classic in their approach. Time for a powerhouse. Source Audio’s Soundblox 2 Orbital Modulator lives up to its wordy name. This expansive pedal will keep you busy with 3 chorus, 3 flanger, 2 resonator flanger, 5 phaser, and tremolo modes. The customization and tone sculpting runs deep here. You can select the shape of your low-frequency oscillator or use a MIDI input for LFO. You can even marry this beast to the separate dual expression pedal and use it as an external input. It’s hard to think of phaser territory that this pedal doesn’t cover- and a lot more. If you want to dive into some truly funky bass tone exploration, try the Orbital Modulator!

I always try to include something for those on a budget. Usually I’ll link to a relevant Mooer or Donner offering, with the boilerplate warning that you get what you pay for (though those two brands are solid for their prices, generally.) But when it comes to phasers, I can’t help but recommend the Joyo JF-06. It’s a very inexpensive clone of the Phase 90, and all the opinions I’ve seen praise its accuracy! For the price, as well as the Phase 90’s reputation on the bass, the Joyo pedal is worth a shot.

I found myself contemplating the music of the 2010s recently, and I realized it’s been a very good decade for throwback. Many of my favorite hits have different flavors of vintage, from the Motown of Shake it Off to the smooth disco of Can’t Stop The Feeling, it’s a great time to dive into retro approaches to music. So grab your bass and pick up a phaser pedal- lay down some warped groove and you could be on the way to the latest throwback hit. Keep working, and feel the joy of the music!