As a musician, you have a power that it’s easy to take for granted. When it comes down to it, music does something to people that nothing else can. No matter what other hobbies a person has, or what else they are into. Almost everyone loves music, and everyone has their own favorite music that “touches” them like nothing else can. Music that transports people somewhere far away. That creates an irreplaceable feeling. Something that can’t even be put into words.

That’s why people do so many irrational things in the name of music. Musicians give up hours and hours of their lives, ignore typical comforts, sacrifice a normal lifestyle. People in the music industry often work for low wages or towards uncertain goals. All in the name of serving the higher calling of music. Because when you feel fulfilled in your purpose, what else matters?

So of course we musicians are always breaking our backs trying to make our music better. More powerful, more immersive. And one of the greatest tools we have at our disposal, no matter what kind of musician we aim to be, is reverb. 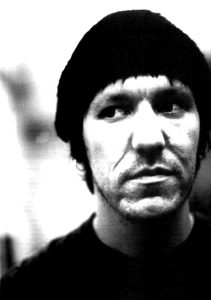 Reverb is everywhere, a feature of daily life. But it’s easy for most people to ignore. Really, it just refers to the subtle echoes that every single sound makes as it bounces around its environment. We constantly subconsciously process reverb without ever being aware of it, and use it to understand what kind of space we are in, or where a sound is coming from. It clearly evolved as a survival technique!

But modern musicians have the privilege of creating and controlling reverb in their music. By learning to use it in an artistic way, you can totally change the experience of your music. You can make your music feel intimate and close. Check out Elliot Smith’s vocals! By combining a quiet singing style and reverb with a short decay, it feels like he is right there in the room with you. Now compare with the other end of the spectrum, Morrissey’s vocals with The Smiths. With his deep resonant voice and long-decay reverb, it sounds like he is singing across space and time.

And it’s not just vocals, although they respond very well to different uses of reverb. Acoustic guitarists can really enhance their playing and create a mood by using reverb to their advantage. Listen again to the Elliot Smith- the acoustic guitar’s reverb is not immediately obvious but it’s actually pretty heavily applied. But again, it’s got a short decay and therefore sounds really intimate and introspective. Compare with John Fahey, one of those musicians love and nobody else really knows of! The playing is dripping with reverb and resonance. The guitar playing would actually sound quiet and almost sleepy, but the reverb lifts it into the stratosphere.

John Fahey recorded that in 1966, so he was probably actually playing in a huge room. Or old-school reverb techniques like plate reverb may have been used. These days, the digital revolution has given acoustic guitarists incredible power in the form of pedals. Read on for a list of pedal recommendations that acoustic guitarists can make use of, for recording, practicing at home, or especially for live performance. They’ll take your playing to places you never imagined!

There are a few things to keep in mind as you start to experiment with reverb and acoustic guitar. Always put your artistic intention first. What kind of feeling are you trying to create? It’s easy to get lost in the details of all the options you face, and to play with things just because they are fun or because they are there! I recently saw a performance of two experimental ambient musicians in a small club. Their music was obviously an exploration of tone and gear, there was more equipment on stage than all the other acts that night put together! But to be perfectly honest, I think they were the only two people in the room who actually enjoyed their own set. The musicians were so absorbed in their gear and process, that they lost sight of the whole point of having musicians on stage!

When and How to Use Reverb 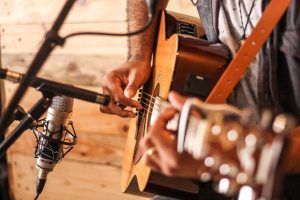 Acoustic guitar has quite a beautiful tone on its own, no reverb necessary. Furthermore, whatever space you play it in will naturally provide its own reverb. So it’s not always a great idea to drown your tone in more reverb, because you may be subtracting more than you are adding! But if you’re playing in a fairly small venue with an audience, and you’re playing solo or with a small group, your acoustic’s tone will probably not have a chance to reverberate in a satisfying way. The audience and the small room combine to soak up the natural reverberation. A reverb pedal can really transport the audience to a different space!

Another great time to use reverb on acoustic is when you are providing background music in a live setting. But cranking the verb, you can sound a bit more distant, and you won’t make it difficult for people to converse and relax.

Amplifying acoustic guitar for a live performance often means sacrificing tone. PIezo pickups and non-ideal PA systems can wreak havoc on even the most beautiful immersive tone, leaving it a thin shell of its former glory. A beautiful reverb pedal can restore the lustre and depth of your tone!

There are many, many more situations where reverb can help you out. Just keep your ending goal in mind, and make sure the reverb is taking you closer to it, not further away!

There are a few common types of reverb “sound.” Electric guitarists often favor the classic Fender spring reverb, which comes front and center into the surf rock sound for example. As gorgeous as spring reverb sounds, it may sound unnatural when paired with acoustic playing. Acoustic players tend to prefer a digital reverb sound, which accurately and immersively imitates the sound of playing in different size halls and rooms.

I can’t help but start with Boss’s RV-6. After all, the RV-2 was the world’s first digital reverb pedal when released in 1987. And Boss is famous for its selection of moderately-priced high-quality pedals, with many like the SD-1 considered bonafide classics.

The RV-6 is moderately-priced and a great starting point. It isn’t overloaded with controls like some pedals here- not everyone is looking for a music studio in pedal form. But of its 8 preset reverb forms, some have tons of potential for acoustic guitarists. Like the “Shimmer” with sparkling high frequencies. Or “Dynamic” which automatically ducks out of the way of your playing, ensuring that you sound powerful but not obscured in a fog of sound. The RV-6 is an excellent middle point of price and power.

MXR is another heavy-hitter in the pedal world, well known for such classics as the Van Halen favorite Phase 90, and the Dyna-Comp compressor. Much like Boss, it’s always a good bet in terms of price and quality. Interestingly, it took this classic brand until 2016 to introduce a reverb pedal, but the M300 was an instant hit. It’s not the cheapest, and it definitely is not the most precisely tunable- it only features three knobs. But the M300 is popular because- it just sounds good! It’s a very musical and ear-pleasing reverb. What more can you ask for?

As one review observed, the Hall of Fame 2 is the obvious direct competition to the aforementioned M300. They are priced similarly both very well-regarded. In terms of feature set, the Hall of Fame looks like an obvious knockout on paper. Stereo out, downloadable custom reverb algorithms on top of the prepackaged options, a unique foot-powered “shimmer” effect for more exploration. So how is this even a competition? Well, some people prefer its tone, and some prefer the M300. So you ought to listen to samples for yourself to see which one suits you. Of course, people who enjoy deep customization are probably going to get more out of the Hall of Fame. Those looking for a pedal that just sounds great out of the box may prefer the M300. As an added bonus, TC Electronics also makes a more inexpensive micro version of the HoF, which is still impressively feature-laden.

First, pick up your jaw from the floor. Yes, the AmbiSpace AS-1R costs that much.  Now hear for yourself. This reverb just sounds pristine. Completely indistinguishable from natural reverb. Beautiful and deep. This unit doesn’t have the depth of experimentation and exploration of some other pedals in its price range. But if you have the money, you just can’t beat the acoustic tone.

I always try to include something for those with tight budgets. We’re musicians after all, not investment bankers! For 1/10th the price point of my previous recommendation, check out Donner. For the price, Donner does a great job. This new company out of China has made a name for themselves with inexpensive and relatively high-quality pedals. Considering the Square Verb includes seven presets three parameters to sculpt your sound, you could do much worse! This pedal will do the job for many musicians.

Acoustic guitarists may wonder how they ever got by without a reverb pedal. Even if you are a single person performing with an inexpensive guitar, a great reverb pedal can elevate a simple performance to new emotional heights. So keep working, and always feel the joy of the music!