I was recently browsing a forum for Les Paul owners. Someone had posed the question, to which genre of music is the Les Paul most suited? The answers were variations on a theme, but one response summed it up nicely: “The kind with notes in it.”

This is an exaggeration, but the Gibson (or Epiphone) Les Paul is a verifiable classic for a reason. Introduced in 1952, this gorgeous design trailed the Telecaster by two years and headed off the Strat by another two. The Les Paul is an excellent contrast to those two guitars, however. The Les Paul and the two Fenders could be described as the founders of parallel families. The Tele and Strat are known for their single-coil tone, popular in twangy aesthetics such as country and surf. But the Les Paul originally had P90 pickups and now has humbuckers. Relatively speaking, its tone is round, warm, and saturated. The Les Paul is the guitar for high-gain playing, among many other things. 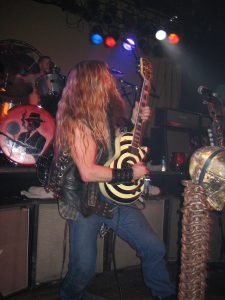 The Les Paul’s namesake was an extremely innovative guitar player and recording artist. Among other things, he was one of the first to successfully experiment with multi-track recording, overdubbing, and close-miking. He also invented the flange effect.

Ironically, Les Paul was associated with country and jazz playing, but now his guitar is known for just about anything but these genres. The Les Paul plays a mean rock, classic rock, or blues. It can be heard on classic recordings by The Rolling Stones, Eric Clapton, The Who, and The Grateful Dead. In modern times, guitarists have discovered its very heavy solid body and thick humbucker pickups are excellent for high-gain hard-rocking applications. Guns ‘n’ Roses, Kiss, Ozzy Osborne, and Rush recordings make great use of Les Pauls, and the guitar is possibly The Pop-Punk Guitar today as well.

The Les Paul’s scale length affects its characteristics, and therefore affects string choice as well. Compared to the Fender siblings, the Les Paul has a short scale (25.5” vs 24.75”.) This means the Les Paul has a thicker, muddier tone, as opposed to the Fender twang. It is also not as apt at bending notes, and that sort of expressive playing. Guitars with shorter scales are more associated with rhythm playing or “comping” and less with shredding or soloing. That said, the Les Paul’s chunky and distinct tone is responsible for some of the most iconic solos of all time. 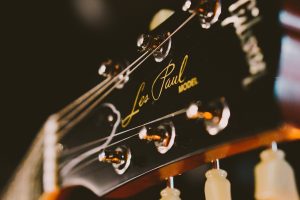 One of the simplest, yet most effective, changes you can make to your guitar is to change your string gauge. String gauge refers to thickness, and is usually referred to in the short-hand by the number representing the high E string. For example, medium-gauge string packs usually have a high E string of 0.010” and are referred to as “.010s”. Strings are also available in light, extra light, heavy, and extra heavy, though names vary depending on the maker. Lighter strings are known to have thinner tone, and break more easily, but they are easier on your fingers when playing and better for bending. As you may guess, heavy strings have the opposite characteristics. They require some muscle to play, but have thicker tone and tend to last longer.

Light, medium, and heavy strings can all be great on Les Pauls for different contexts. Since the guitar already has a fairly short scale, lead players should err on the side of lighter strings. This will make quick and expressive playing easier. And with the Les Paul’s dual humbuckers, you already have tone to spare. I personally love the buttery lead tones of a Les Paul played through a vintage Fender amp, like a Twin Reverb,

Rhythm players in hard rock and punk contexts should try heavy strings. Nothing beats the massive distorted tone you can get from a Les Paul with heavy-as-hell strings played through a Marshall or Orange amp. And the heavy strings just encourage you to chug the rhythm that much more aggressively. Players of harder genres will be grateful to break strings less often as well. 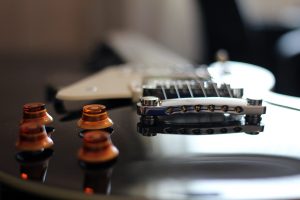 Nickel-plated steel strings are popular because they do the job in almost any context. But try stainless steel strings on a Les Paul, because the brighter tone could bring out some of the twang that the humbuckers tend to mute.

I’m not aware with any string maker with D’Addario’s pedigree. This company has its roots in an Italian family that has been making lute and mandolin strings for hundreds of years, and since coming to New York has developed into one of the premier modern string brands. The strings are well-made, well priced, offer loads of choices, and rightfully have a loyal following. It’s hard to go wrong with their EXL110 nickel-wound steel strings, a compelling candidate for the World’s Standard Electric Strings. As I mentioned before, try heavier gauges for rhythm playing in hard genres, or lighter gauges for lead.

Alternately, try their pure steel line of EPS515 strings. The company brags about how their highly magnetic steel alloy offers “brighter, crunchier tone and increased sustain,” and I just know that somewhere someone started salivating as they imagined what a Les Paul could do with that.

D’Addario’s NYXL line has been creating a buzz recently as well, shooting to the top of best-strings lists. While they are certainly pricier, their high-carbon steel core offers greater strength and longer-lasting strings. Try the NYXL strings if you want to play lighter-gauge strings on your Les Paul.

Relative to D’Addario, Ernie Ball came from nowhere. But this brand has shot to the top of many players’ regards. Ernie Ball’s strings are known for excellence in quality and great prices, and their packaging enthusiastically brags about the well-known players who rock them. Ernie Ball’s answer to the EXL110 line is their Slinky line. To be honest, dear reader, I think the difference in the two strings comes mostly down to brand loyalty. They have similar prices, materials, and gauge options. Many hardcore genre players love Ernie Ball’s heavier options, such as “Power Slinky” and the evocatively-named “Not Even Slinky.”

I’m going to step in with a personal recommendation here. Ernie Ball recently released the world’s first line of cobalt alloy strings. I bought two packs for my electric guitars (an Epiphone Les Paul and vintage Japanese Teisco Tulip.) Dear reader, I am an instant convert, and I expect to buy these again. They are a little pricier, but the alloy offers a uniquely rich tone. My personal favorite combination- Les Paul, Ernie Ball cobalts, and vintage Fender amp- just generates an ocean of tone now. Check out the graph visible on the back of the packaging. That huge bump in frequency response in the mid- to high-frequencies does wonders with the Les Paul’s humbuckers.

As I mentioned in the D’Addario section, pure stainless strings have unbeatable crunch on a Les Paul. And Ernie Ball offers a line comparable to D’Addario’s EPS515.

Elixir is another newcomer making waves. For Les Paul players who like to play rough, their coated strings could be a revelation. They are not the only coated strings on the market, but Elixir’s seem to be players’ favorite. While their higher price point means you may just end up breaking even overall, the strings can take a beating as you pull your best Zakk Wylde. Try their Polyweb strings for a brighter and faster tone, or Optiweb for some smooth lead playing.

DR’s strings have ended up on other lists I’ve written. Both the Telecaster and the Stratocaster can sound great with DR’s Pure Blues strings. Like those strings, their Tite-Fit line has round cores. Most electric guitar strings have hexagonal cores, but players attest that Tite-Fits have a unique tone that’s difficult to describe. Furthermore, they are known to have the strength of heavier gauges, but the give and flexibility of lighter gauges. They are particularly popular for players who want to do drop tunings without going to heavier strings.

GHS features a line of strings humorously named “Boomers” with their own loyal following. Metal lead players like them for their very bright tone, which can bring out that shiny distorted tone that just grabs your attention.

No matter what road has led you to your Les Paul, the right set of strings can really complement your tone and playing style. Ultimately, string choice is as personal and subjective and clothing style, and strings aren’t expensive- experiment with different sets until you find one that speaks to you. And carry on the proud and ever-adaptive Les Paul tradition of rocking the hell out!