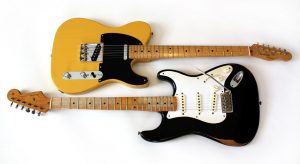 The Telecaster has the bad luck of standing in its cousin’s shadow. The Stratocaster, of course, is practically visually synonymous with the electric guitar. Yet, the Telecaster is an extremely proud and iconic guitar in its own right, a worthy pairing to the Strat. With their fabulous googie curves and space-age portmanteau names, it’s little wonder that the Telecaster and Stratocaster have maintained central positions in American music for decades.

The Telecaster is known to be more typecast and specialized than its star-studded cousin. It has a rich tone that shines in numerous contexts. The Telecaster has found its niche in country music first and foremost. Run through a classic tube amp such as a Fender Twin or ‘59 Bassman, the Telecaster achieves an iconic “American” sound. A twangy tone, suitable for lead or rhythm, practically the foundation of classic country. Beyond that, the Telecaster is an excellent choice for rhythm or lead playing in funk, soul, reggae, and blues. It has a place in rock and jazz as well, though it is more an outsider in those genres.

But it has its limits as well. It’s not great for very high-gain genres, such as hardcore punk and metal, without customization. Overall, the Stratocaster may have the flashier and showier association (for which we can thank SRV, Hendrix, Clapton, Jeff Beck, and others). But the Telecaster is a reliable, modest, yet gorgeous workhorse.

Buying Strings for the Telecaster

If you are shopping for strings for your Telecaster, you have a number of options. Playing style and preferred genre has an impact, and my recommendations will come with notes about those. Overall, though, the strings are the tactile link between your soul, your fingers, and your sound. So at the end of the day, nobody can tell you the strings that will feel best to you. That said, this guide should get you started choosing. 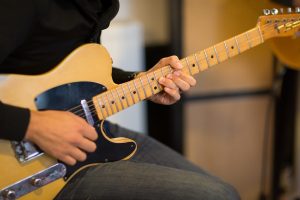 Discussions comparing guitar strings often start with gauges, before brands are even mentioned. String gauges refers to the thickness of the strings. They are usually differentiated in shorthand as “light,” “medium” or “heavy”; or by the numerical gauge of the high E string. For example, the popular medium-gauge string combination ranges from .010 to .046 in gauge, so this set is referred to as “.010s”.

If you are trying different strings out, gauge is probably the most immediate difference you will notice. Medium gauge strings are a good default for almost any playing style, but there are numerous reasons to move heavier or lighter. Lighter strings (common size .009-.042) are far more flexible. If you like to use lots of bends, play high, or play fast, then lights may be the way to go. They also require less endurance- light strings require a lighter touch. This could be helpful if you are playing for multiple hours a day. On the other hand, lighter strings are less durable- they are more liable to break. Furthermore, their tone is thinner and less “chunky.”

As you may expect, heavier gauge strings (such as .011-.048) have the exact opposite characteristics. They have a more substantial tone, thicker and deeper. Heavy strings can handle harder playing for a longer time. But they will resist your playing and expression more. Bends are harder, fretwork is harder.

No matter what genre you are playing, there could be a place for lighter or heavier strings. Country players like lighter strings for a more flamboyant, bendy playing style, or heavier strings for a thicker tone. Funk and reggae players praise heavier strings- the greater resistance contributes to the laid-back, percussive role the guitar plays in those genres. But even within genres, it comes down to player style and preference. 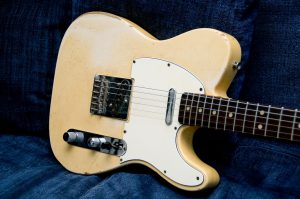 Once you have found a gauge that suits you, try experimenting with different string materials and construction. Most strings are some combination of nickel or steel. Pure nickel strings are the vintage choice, and have been experiencing a renaissance. The renewed interest is based on their warm, classic sound. On the other hand, stainless steel strings are brighter, with a “snap” to their tone. Nickel-plated steel is the default choice, with a tone between the two extremes.

As for construction, most guitar strings are roundwound. This usually refers to the lower strings- E A D (and sometimes G). If you run your finger down them, you’ll notice a bumpy texture. Alternately, flatwound strings have a smooth texture along all the strings. They are sometimes referred to as “jazz strings” as their warm, smooth tone is most associated with jazz, blues, and swing bands.

A handful of string manufacturers dominate the market. To be honest, the brands I am going to discuss are all fabulous. They have established histories and loyal fans. As I said before, at the end of the day, the choice is based on what feels best to you. Read on for a few of the best examples.

The D’Addario name might be the most iconic and established one in strings. D’Addario are like the Steinways of guitar strings. Their history stretches back to string-making families in Italy in the 17th century, and the company is now one of the world’s top makers of guitar strings. While researching, I noticed that D’Addario strings of one form or another were among the most often recommended.

D’Addario NYXL line are a solid all-around choice.  They are available in a huge range of gauge combinations. The NYXL line boasts a high-carbon steel core and nickel coating. As a result, D’Addario claim they are some of the strongest strings for their relative gauges, and provide a slightly warmer tone. With these stronger strings, you can go for a lighter gauge without worrying as much about string breakage or compromising tone. The NYXL line is also known to require less stretching when brand-new, and stay in tune for longer.

What’s more, the NYXL strings feature a plain 3rd string- that is to say, the G string is unwound. Typically, the E A D G strings are wound and the B E strings are unwound. Players who employ a lot of bending, country or otherwise, appreciate the plain 3rd string. This allows easier bending on more notes- ideal for many of the same playing styles in which the Telecaster shines.

As beloved as the NYXL strings may be, they are significantly more expensive than typical strings. For the same price as one pack, you can score three packs of D’Addario’s classic EXL110 line. Once again, these are nickel-wound steel strings, with a plain 3rd string. The main difference is the lack of high-carbon steel core, so expect these strings to be a little less durable. Their bright tone is great for the Telecaster’s twangiest uses. Country players might try the lighter gauges such as .009s or .010s for a Jerry Reed chicken-pickin style.

If you play soul, blues, or jazz, you might consider the darker vintage tone of D’Addario EPN110 line.  These pure nickel strings will sound less twangy and more smooth. Try a heavier gauge for a beautifully round Telecaster tone.

Ernie Ball tends to be the second name in strings that’s mentioned after D’Addario. The name is most famous as a string manufacturer, and as the parent of Music Man, an instrument maker founded with the help of Leo Fender later in his career. While the company has far less history in string-making behind it, Ernie Ball has rocketed to a place of great respect among musicians. It is a brand beloved by professional musicians who play music for the sake of music, and hobby musicians are catching on as well.

Ernie Ball Slinky strings are another iconic all-around choice, comparable to the D’Addario EXL110 line in many ways. They are nickel-wound steel strings with a plain 3rd string. Check out the lighter “Super Slinky,” “Extra Slinky” or “Primo Slinky” lines- country players say these are great on a Telecaster for a “Bakersfield Sound” twang. Or, for something different, try the “Skinny Top Heavy Bottom” with light-gauge high strings and heavier low strings. Ideal for bends and expressive playing on the high strings, but thicker sound on the lower strings.

For something different, Ernie Ball has recently released the world’s first cobalt strings. The company boasts that cobalt strings are higher-output with unmatched clarity of tone. The package shows graphs comparing the frequency response of steel, nickel, and cobalt strings. Notably, cobalt strings have a huge boost in the mids and upper mids. This will translate to a massive boost in tone. Great news for Telecaster players- the guitar will be able to sing like never before! It’s better to have too much tone, rather than not enough- you can always lower it on the guitar or amp if necessary.

DR are a smaller, but highly respected string outfit. I am including their Pure Blues strings here because I recognize many of my recommendations so far have mentioned the Telecaster twang. So if you seek a mellower, more vintage tone from your Tele, try the Pure Blues. These strings are pure nickel, and also feature an uncommon attribute. Most modern strings have a hexagonal-cross-section core on the wound strings. The DR Pure Blues actually have a round core in the wound strings. Players praise the sweet and mellow sounds of the round core.

Telecaster players are a modest yet proud breed. They carry the banner of tradition and fortitude. Whether you play blues, reggae, country, soul, or rock, the Telecaster can bring a gorgeous and iconic tone to the sound. Have fun trying out different brands, gauges, and materials of strings, searching for your perfect companion. As you explore your Telecaster’s possibilities, don’t miss our articles on classic rock distortion pedals, and reverb pedals for surf, indie, and shoegaze, to further expand your horizons. Keep feeling the joy of the music!