The flute has disappeared a bit from the zeitgeist since its brief moment in the spotlight with Jethro Tull and Genesis. Yet this tragically underrated instrument is really so gorgeous, and few people beyond its own players really appreciate that. The bands I listed prove the concert flute’s prog rock credentials, but the instrument can just as easily weave gracefully throughout a classical or jazz arrangement.

The flute is also a fussy, temperamental instrument. Tiny, hard to tame, difficult to even sound on initially, yet one of the most expressive instruments of all. So when you want to take a mic to it, you have to do it correctly. The flute has unique mechanics, and therefore a unique mic technique.

That said, very different techniques should be used when miking a flute in a live performance as opposed to a recording studio.

What Makes the Flute Unique 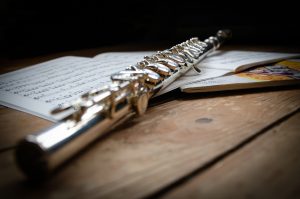 Even among wind instruments, the flute stands alone. Brass instruments, such as the trumpet and trombone, and other woodwinds, such as clarinets and saxophones, employ a vibration in the mouthpiece which is then amplified by the bell. The flute’s sound, however, mostly resonates from the mouthpiece, by the player’s lips. The flute also uses a surprising amount of air for such a small instrument. Unlike other wind instruments, the player’s air is not directed entirely into the instrument, and travels past the instrument’s mouthpiece. Finally, the flute has a much mellower tone with less prominent overtones than a trumpet or saxophone. 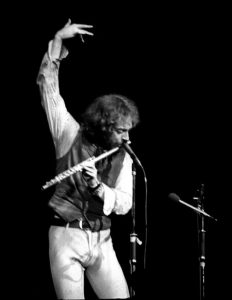 If you are miking a flute for a live performance, the first question to answer is whether you will employ a typical mic on a stand, or a clip-on mic. Some flute players like to sway theatrically while playing, and in fact some players couldn’t stop if they tried. Anyone who has tried to mic a singer with poor mic technique can imagine the headache of a flute player who is swaying closer and farther from the mic.

If you intend to use a mic on a stand, the Shure SM58 is a popular choice. This has less to do with these mics being specialized for flute players, and more to do with the fact that they are extremely common in live mic situations. They are also reasonably flattering to a flute’s tone, and pretty well-suited to the job.

While the Shure SM58 is a fine choice, it is not the greatest live vocal dynamic mic in the world; it is just inexpensive, common, and durable. If you are a flautist who is serious about live performance, you might invest in a better option. Check out the Shure Beta 87a. This mic is more expensive than most live vocal mics, but there’s a reason- it is a condenser mic, not a dynamic mic. Condenser mics are more expensive and delicate than dynamic mics, and require phantom power. But they have a level of detail and airy quality that no dynamic mic can capture. Since the flute is such an expressive and breathy instrument, with so much high-frequency detail to its performance, this mic could be worth the fuss.

Here, though, the mechanics of playing a flute become relevant. If you have ever tried to whistle into a live mic, you know that you cannot whistle directly into the mic, regardless of the presence of a windscreen. The breathy sound overpowers the tone of the whistle. The same is true of flutes- the flautist cannot aim directly into the mic the same way a singer can.

The player must use flute mic technique, then. Play with the mouthpiece close to the mic, but do not aim directly into it. Some players point the mic slightly too high, and play just below it. Others place the mic between their left hand and the mouthpiece, angled towards the mouthpiece, and play roughly 45° off-axis from the mic.

Keep in mind that flautists can also blow in slightly different directions depending on what part of their range they are playing in. Ask the flautist to play low and high during mic check. This will also reveal any EQ that may be necessary, as the flute’s tone tends to be more noticeable in the extremes of its range.

If you so choose to use a clip mic as opposed to a mic on a stand, you have plenty of options as well. Professional flautist Dr David Klee recommends his setup: a Shure WL93 paired with a Shure transmitter/receiver. This setup is relatively expensive compared to a simple dynamic vocal mic, but may be worth the investment if you want the freedom to roam the stage. In Dr Klee’s opinion, the sound you capture will not make much of a difference to the audience’s ears, as opposed to a Shure SM58 or similar mic.

Miking the Flute for Recording

The large-diaphragm condenser mic is the obvious choice for studio flute recording. Depending on your budget, my typical recommendations are the Lauten Audio LA-220 as the best all-around condenser for lower budgets, or the Avantone CV-12 for a medium-budget condenser that punches far above its weight. If your budget stretches to four figures, equally sturdy options abound. I love my Neumann TLM-103, which is sharp and crystal-clear.

Experiment with mic placement. The middle of the flute is a reasonable starting point. Closer to the mouthpiece will sound brighter and airier, while closer to the foot will be duller and smoother. Jazz flute in particular benefits from the brighter tone, while a flute that is being dubbed behind a vocal track might sound better with a duller tone so as not to compete with the vocal. Playing closer to the mic will create a proximity effect that makes the flute sound “bigger” on the recording, which could be an attribute or an issue.

Also consider a dual-mic setup. A cardioid condenser, set up as described above, and a second cardioid or omni mic to act as a “room mic.” Mix the two tracks to taste, to make the flute sound more “close and intimate” or “distant and powerful.”

Condenser mics may be the obvious choice, but have you ever tried a ribbon mic? I once heard it said that there are two types of studio musicians: those who love ribbon mics, and those who have never tried them. I also admit that my move from the latter to the former is a recent development. So I am probably suffering from some kind of “I have to tell everyone about ribbon mics”-itis.

That said, ribbon mics are an eternally popular choice for all sorts of wind instruments, if a bit obscure. Ribbon mics have a naturally very dark tone, which could be helpful if you want the flute to sound very smooth in the recording. Yet they are also hyper receptive to EQ, and can be made as bright as you wish when processing. Ribbon mics pick up sound in a unique way; I’ve heard it said that they “hear like your ears.” The words that people tend to land on when describing ribbon recording are “smooth” and “natural.”

Many ribbon mics are very expensive, such as the Royer R-121 which could fairly be titled “THE ribbon mic.” Yet Avantone, one of my favorite manufacturers, offers the unbelievably priced CR-14. This is the ribbon mic I bought, and I’m personally blown away by it. It would be a steal at double the price.

Keep in mind that ribbon mics have very low output, so many people find they need to buy a mic activator such as the Cloudlifter CL-1 to get enough clean gain out of their ribbon mics. Ribbon mics are also figure-8 polar pattern by design, so they make great room mics. Try a cardioid condenser mic as your mouthpiece mic, and a ribbon mic as your room mic, with the ribbon mic rotated so that its null point (one of the sides) is pointed towards the mouthpiece.

A flute may be a complex challenge to mic, but it can sound great with a little coaxing. As long as you serve its unique needs, you will be richly rewarded. If you are having a hard time mixing or processing your flute recordings, consider investing in a professional mixing and mastering service. These services can be more affordable than you’d expect, while also being a powerful tool to learn by example. Keep working, and feel the joy of the music!