Why do we like vinyl records so much? And don’t say we don’t, because we do. Nobody would have believed you ten or twenty years ago if you told them that in 2019, vinyl records would outsell CDs for the first year since 1986. Even though vinyls are more primitive, fussier, more limited. Even though they get scratched and skip and can’t be played in your car.

When it comes down to it, vinyl records are just plain cool! They have this “je n’ai sais quoi” that’s difficult to pin down. Something about the history, the particular combination of “imperfections,” the character. The process of engaging with your music in that physical way. Of submitting to the limitations of the medium. You can’t give your crush a mix-vinyl! If you don’t like track three on your favorite record, is it worth getting up and trying to skip it?

Music is a delicate balance between convenience and fidelity. Usually the two factors vary inversely. Case in point, when cassettes were introduced, they had numerous advantages- price, portability, size, durability. Car-mounted tape players! Walkmans! But they sounde very lofi compared to vinyls played on a decent system. And throughout the tape era, audiophiles preferred vinyl.

The rumor persists that vinyl is still the most high-fidelity way to experience music. This is mostly false, but kind of true. Overall, since CDs were introduced, they have outpaced vinyls in terms of sound quality. Questionable mixing trends of the 90s and 00s aside, CD audio is crystal-clear compared to vinyls. And in the modern era, FLAC files are comparable to CD quality. At this point, the standard mp3 bit-rate of 320 kbps is virtually indistinguishable.

“The Warmth of Vinyl” 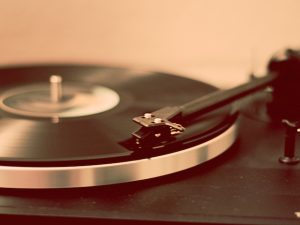 Vinyl records have a reputation for “warmth” that somehow is interlinked with their perceived ultimate fidelity. Actually this warmth is an imperfection of the medium- but a pleasant one. Vinyl records struggle with very low frequencies. Often tracks mastered for vinyl overcome this by applying EQ with cut bass, and boosted low-mids to overcompensate. Hence, warmth. Vinyl records also introduce subtle harmonic distortion on playback, which adds to the perceived warmth. So it’s true that vinyls sound good! But they are not as “true” as modern digital reproduction.

Except, in a way, vinyl records are the truest! It comes down to the difference between analog and digital media. For comparison, think about a digital vs film photo. If you look too closely at a digital photo, you’ll start to see the pixels- the digital limit of fidelity. Whereas a film camera is only limited by the sheer power of the camera. Incredible film photos exist that can be viewed under a magnifier, to reveal a level of detail invisible to the naked eye.

In much the same way, a vinyl record is limited only by the precision of the tools used to make it. But the groove on a record is actually a physical impression of the sound wave, so it’s theoretically the most accurate copy of the original sound.

This is mostly academic at this point. From the average person’s point of view, the question of vinyl vs digital is more an aesthetic choice.

The earliest vinyl players did not use electricity. Have you ever played a record with the speakers turned off? You can still faintly hear the song- that’s the sound of the needle physically traversing the groove. And that’s why early gramophone players had the ornate bell- it amplified and projected this sound, behaving just like the bell of a trumpet!

Of course, we’ve gone electric in the past century or so. But when you’re crafting your vinyl setup, the amplifier is still its own dedicated consideration. Unlike tape and CD players, which can plug straight into a powered speaker, vinyl players are naturally very low-output. They are paired with their own vinyl pre-amps that are then routed to the speakers.

And this gives you yet another opportunity for exploring that rich vinyl tone! The first choice you face is between a tube or solid-state vinyl amplifier.

You may recognize these terms from guitar amplifiers. Well, it’s much the same type of decision to make. For a long time, a tube-amplified stereo (or guitar amp) was the only choice. In the mid-60s, solid state came on to the market, and briefly dominated. For both stereos and guitar amps, solid state is cheaper, louder, more durable. But both vinyl and guitar enthusiasts have gradually reawakened to the advantages of the primitive vacuum-tube technology. 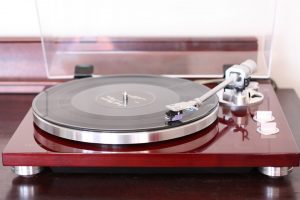 Complicating matters, at this point, many classic foundations of the SS-vs-tube debate are now obsolete. They say solid state is harsh and cold, that tubes are noisy and can’t power bass properly. These perceptions have gradually been engineered out of relevancy. But some overarching themes remain. Solid state vinyl pre-amps are louder for the price. And in general, they are lower-noise and lower-maintenance. In terms of tone, they are more detailed, quick, and “immediate.”

That tube tone, though. It adds a quality frequently referred to as “bloom.” It enhances and enrichens the mid frequencies. Vocals and instruments will feel more natural, more realistic. Perhaps you could say that solid-state systems play your records, and tube systems “sing” them.

The biggest consideration today is, will solid-state or tube qualities fit your own personal system better? If your speakers, room, and turntable tend towards harsh and sterile, consider a tube pre-amp to inject some life. If your system already has a fussy and vintage character, a solid-state pre-amp could be warranted.

We are now entering audiophile territory. This can be dangerous. Sure, instruments can be expensive, but we all know musicians are broke, which generally keeps a lot of prices in check. Audiophiles, on the other hand, have been known to build sound systems that outprice an economy car. I will make my recommendations based on budget levels.

If you’re looking at very inexpensive tube amps for your vinyl player- I won’t lie, it’s a tricky balance to strike. Sure, there are plenty of choices for very appealing prices. But between low build quality, added noise and distortion, and overall inferior audio quality. You’d essentially be paying for the tube visual aesthetic, sacrificing the actual music in the process.

But along comes the Little Bear T7 to save the day. I’d go beyond calling this the best tube preamp in its price range- I’d actually call it the only one worth owning. Look at it, it’s adorable! The Little Bear is also fairly simple to swap the tubes out, which is an appealing quality in lower-end preamps. You can upgrade the sound gradually without springing for a new unit. Overall, the T7 will get you the best tube sound quality in its price range.

But it’s not without issue. Are you surprised, when you can spend literally 100x this amount on a tube preamp? The Little Bear is not that loud. It’s still quite noisy compared to a solid-state amp in its price range. Some users report hum issues, and others say they rectified this by removing its aluminum casing. What can I say about a product that may work best when its factory casing is removed? Anyway, from reading this, you already know whether the T7 appeals to you or not.

If your budget can stretch to this level, your vacuum tube vinyl preamp choices are more serious- and competitive. During my research, three preamps caught my eye.

It seems appropriate to start with the Little Bear’s less-little cousin, the T11. Fortunately, the preamp’s quality is proportionate with its elevated price point. Reviews agree that the T11 Little Bear is the preamp to beat at its price point. In fact, you can say many of the same things about the T11 as the T7. It has a great, warm, powerful tube tone for its price. You can upgrade the tubes (known as “tube-rolling”) to further improve the sound. Very appealing when you’re on a budget, to gradually improve your system!

At the same time, the T11 is much quieter than the T7- but still relatively noisy for its price-point. The company provides a 10-foot grounding wire, with the hilariously primitive suggestion to connect this wire to a radiator or metal window to fix the hum.

Facing off with the T11 is the Bellari VP130. Despite the relatively low price, the VP130 is actually manufactured in the U.S. The reviews are unanimous- it already sounds great for the price. But if you upgrade the stock tubes and power supply, you can have a really phenomenal unit on your hands. It doesn’t show off its tubes like the Little Bear models, and it’s definitely a commitment to upgrade the components. But the VP130 promises detailed, “three-dimensional” sound at its best. And did I mention it has a built-in headphone preamp?

If your budget can inch upwards a bit more, check out the Pro-Ject Tube Box S2. Here you are finally moving away from some of the budget-oriented compromises of the aforementioned preamps. The S2 doesn’t just sound like a tube preamp, it also sounds great. Low-noise, punchy, detailed. Yet featuring that gorgeous tube tone that you are after in the first place. 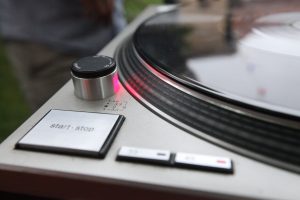 I’m going to be totally honest. If your budget has four or more digits, then your search for a vinyl preamp is going to go beyond this article by virtue of necessity. You probably wouldn’t buy a car because I said it was great right? You’d want to drive a couple around the block, compare multiple expert opinions.

By the same token, if you’re in this category, you’ll want to do more extensive research to match your preamp to your system. Get acquainted with more technical details than I have covered here, like capacitance, moving magnet vs moving coil cartridges. Consider what kind of music you listen to. What kind of room you’re listening in. It’s a hobby that can be as serious as a job!

That said, there are worse starting points than this. Check out the Marchand LN112 MC, which is actually on the lower side of high-end preamp prices. Visually, the LN112 looks like a piece of art. The “stock” tubes are Sovtek 12AX7WA, well-known high-end tubes. But again, if you are in this market, all of your choices are going to sound incredible. That’s a given. It’s a much more complicated matter to find the ideal preamp. On the other hand, it’s not like the LN112 is going to sound bad!

Vinyl records are not the most precise way to listen to music, and tube preamps are not the most precise way to amplify anything. But do you want to go through life pursuing precision, or beauty? Because nobody will argue that a really fantastic analog system sounds beautiful. Sort of like an impressionistic painting- the “smudging” only serves to artistically enhance the overall effect. Between choosing your preamp, gradually upgrading it with new tubes, and overseeing an expanding music collection, you will never be bored with this hobby. Enjoy!